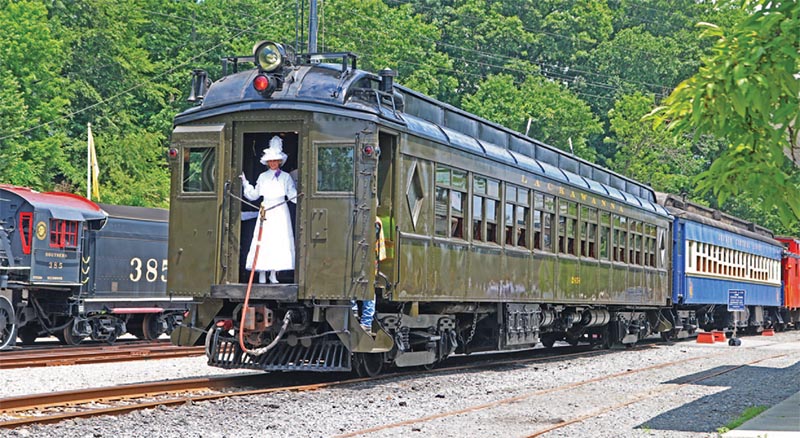 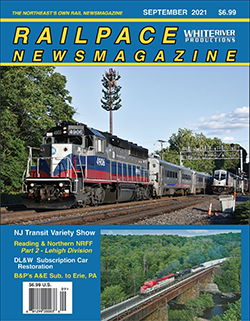 By Steven Hepler and Terence Mulligan/photos as noted

June 20, 2021 was the celebration and first public runs of the outstanding seven-year restoration of Delaware, Lackawanna & Western multiple-unit subscription club car 2454 at the Whippany Railway Museum (WRyM) in Whippany, N.J. Prior to 2454’s maiden run, a dedication ceremony took place at noon, where museum trustee and 2454 project leader Terence Mulligan provided an overview of 2454’s history and acknowledged the benefactors, contractors, and Museum volunteers who worked on the car over the years. Immediately thereafter, the legendary Lackawanna Railroad icon “Miss Phoebe Snow” christened the car to the applause and cheers of the gathered crowd.

WRyM’s Phoebe Snow is an elegant contemporary advocate for the heritage of the “Road of Anthracite.” She is portrayed by Lauren Stauffer, the granddaughter of Morris County Central Railroad (MCC) founder Earle H. Gil who began New Jersey’s first standard-gauge steam preservation railroad at Whippany in 1965. The MCC went out of business in 1980, but WRyM owns both of the former MCC steam locomotives, ex-Southern 2-8-0 385 and former U.S. Army 0-6-0 4039.

Car 2454 was constructed by the Barney & Smith Car Co. of Dayton, Ohio, in 1912 for the Delaware, Lackawanna & Western Railroad (DL&W). In 1930 it was converted from a steam-hauled coach to electric propulsion by the American Car & Foundry Co. Celebrated New Jersey inventor Thomas A. Edison rode as a guest on September 22, 1930. No. 2454 was assigned to the Hoboken-to-Gladstone run, on a train known as “The Millionaire’s Express.” 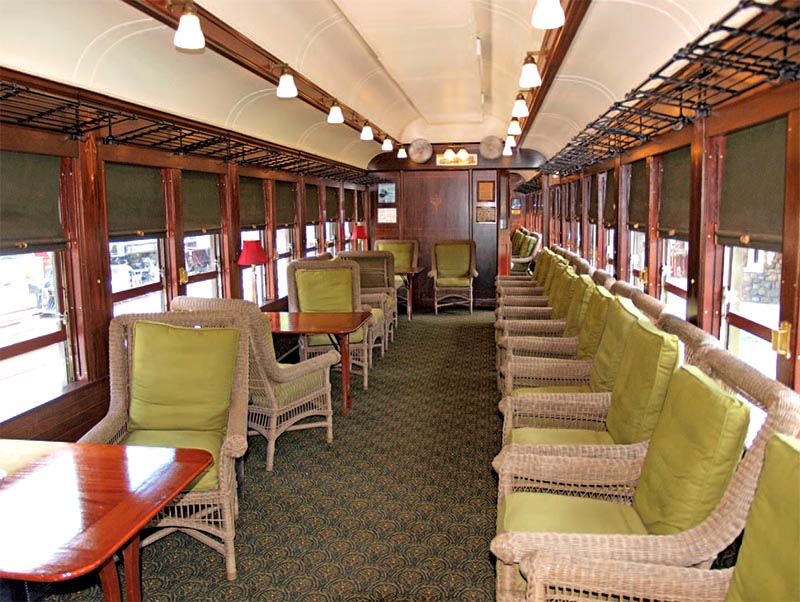 ABOVE: The “A” end of subscription club car 2454 shows the replica cushioned wicker seats and mahogany tables. Seating at this end accommodated 23 riders. The Porter’s galley is at the ‘A’ end (motorman end). The galley is directly behind the motorman’s seat, and just ahead of the former Men’s (Smoking) Section (the larger of the two rooms on the car). The former Ladies (Non-Smoking) Section is at the “B” end). Steven Helper photo

Upon the merger of DL&W and Erie Railroad on October 17, 1960, No. 2454 was transferred to the Erie-Lackawanna Railroad. At that time, DL&W m.u. car numbers changed and No. 2454 became 3454, the number the car would carry through the rest of its active commuter service years.

With the advent of Conrail on April 1, 1976, No. 3454 came under a new operating authority, and maintenance was minimal. During Conrail’s first year, Terence Mulligan inspected 3454 while it was laying over in the Gladstone Yard. He noticed the seams on the side sheets were beginning to puff out with rust, with exterior deterioration everywhere. Deferred maintenance was highly evident. No. 3454 remained in Gladstone – Hoboken club car service another eight years, rolling along in some-what sordid splendor, carrying Malcolm Forbes and other high rollers back and forth in individual rattan arm chairs, sipping cocktails served by their porter, and playing cards.

Read the rest of this story in the September 2021 issue of Railpace Newsmagazine. Subscribe Today!