It’s often called “America’s Freight Train.” Reading & Northern’s North Reading Fast Freight – symboled NRFF – has become one of the most popular attractions in the Northeast. Rail enthusiasts growing weary of the endless parade of Class-1 widecabs revel in a main line time freight hauled by a variety of standard-cab power, including SD40-2s and SD50s, with units repainted into a unique “Fast Freight” livery for this and other R&N timed freight services. The NRFF is the product of Reading & Northern owner Andy Muller Jr., whose vision dream has been owning a continuous main line railroad between Reading and Scranton, a route never before owned by any railroad. He has grown the regional railroad into a powerhouse as one of the largest privately owned railroads in the country which now handles over 34,000 carloads of freight and 140,000 excursion train riders over 400 miles of track.

The NRFF is more than just a railfan attraction, it’s all-business, as a single crew makes a 10-hour nonstop run from North Reading Yard to Pittston, PA and return six days days a week (except Saturdays), operating on a published schedule where plus or minus five minutes defines “on time.” This is “Precision Scheduled Railroad” at its finest.

At 1:30 p.m. a crew marks up at the “tower” at R&N’s Reading Outer Station along Route 61 in Muhlenberg Township, Pa. Forty four minutes later they are on the road, their train having been assembled and made ready by North Reading yard crew YJNR-1. The consist is a mix of insulated boxcars for Kane Warehousing on the R&N Scranton Branch in the Stauffer Industrial Park, covered hoppers of plastic pellets for various consignees, boxcars for Procter & Gamble in Mehoopany, lumber and other miscellaneous commodi-ties for the Scranton–Wilkes Barre region. Train length can vary significantly depending upon inbound deliveries from Norfolk Southern in Reading.

It’s soon up to 50 mph for the sprint north from Tuckerton to Hamburg, and chasing on this segment of traffic-clogged Route 61 is out of the question. The pace is only a bit more leisurely north of Hamburg. The train slows to 20 mph (but does not stop) through Reading & Northern’s Port Clinton headquarters complex, then it’s back up to 40 mph through the verdant hills of the Blue Mountains along the Little Schuylkill River through Molino, Rausch’s, New Ringgold, Atlas and Zehners. 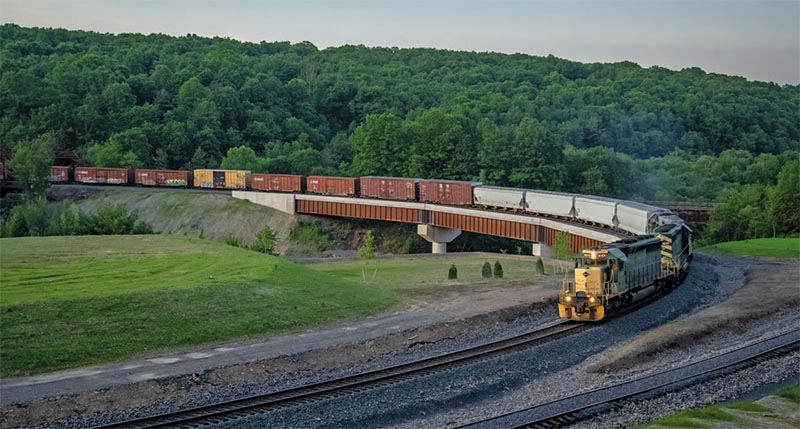 On its present 2:00 p.m. northbound departure from North Reading and 6:55 p.m. return departure from Pittston, the south-bound NRFF-8 crosses the new Lehigh River Bridge at 8:44 p.m. in the last light of day during the longer days of the year. Darryl Rule photo

Following PA 61 north from Port Clinton, turn right onto Route 895 north to follow the train and capture the pastoral farm scene at Molino. There are photo options at New Ringgold, and here a decision must be made whether to continue to follow the train through Tamaqua to East Mahanoy Junction, or to avoid the heavy traffic congestion of downtown Tamaqua and opt for a shortcut direct to East Mahanoy Junction. If choosing the later, return south on PA 895 from New Ringgold one quarter mile and make a right onto Cold Run Road. Follow this curving and hilly side road (later designated Catawissa Street) across U.S. 209 directly to the overpass at East Mahanoy Junction. Drive safely; you will beat the train to EMJ using this shortcut by approximately ten minutes…