By Denis E. Connell and Bill Chaplik/photos as noted

The undulating sand hills of eastern North Carolina, once the province of the original Norfolk Southern Railway between Star and Aberdeen, N.C., hosted an Aberdeen, Carolina & Western open house at its expansive, modern shop in Candor, and excursion unveiling their classic 1950s streamliner, appropriately powered by an A-B set of EMD F-units on Sunday, May 16, 2021.

AC&W owner Bob Menzies welcomed invited guests for refreshments and a tour of their massive shop complex at Candor, N.C. After a safety briefing by AC&W staff, passengers boarded the railroad’s beautifully restored private cars for a day-long excursion behind freshly painted A and B F-units 271 and 276. Formerly part of the current Norfolk Southern executive train, Bob Menzies acquired the units at auction. Rebuilt by NS to GP38-2 standards, 271 is a former Baltimore & Ohio F7 (designated as an F9 when on NS) built in 1952, and 276 is an F7B built for the Chicago Great Western in 1950. Both units were refurbished by Norfolk Southern for Executive Train service at the Juniata Shops in Altoona, Pa. 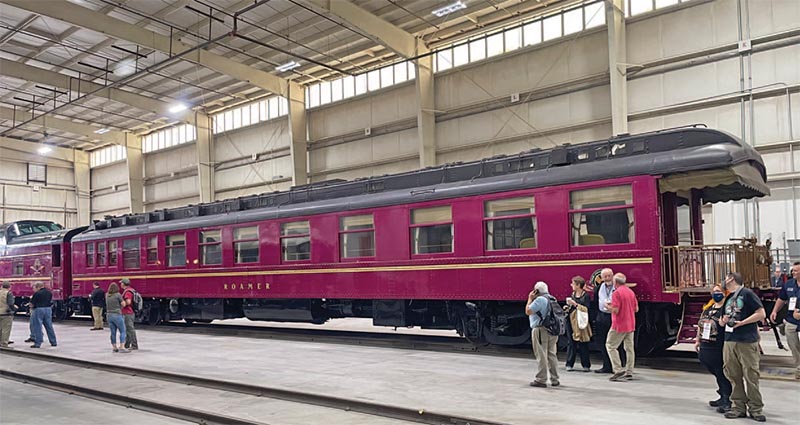 Our consist for the day was AC&F baggage car 901; Pullman 7014 Pinehurst; Pullman solarium lounge 150 Mission Santa Ynez; open-air canopy car 402; open-air patio car 401; former-Union pacific dome-observation 20 The Menzies Vista; and 1918 business-observation car 600 Roamer, built by AC&F and once owned by the Morris Run Mining Co. of Hazleton, Pa., circa 1935-1944. The observation end doorway of dome 600 was rebuilt by the AC&W to allow handicap access to the open cars…