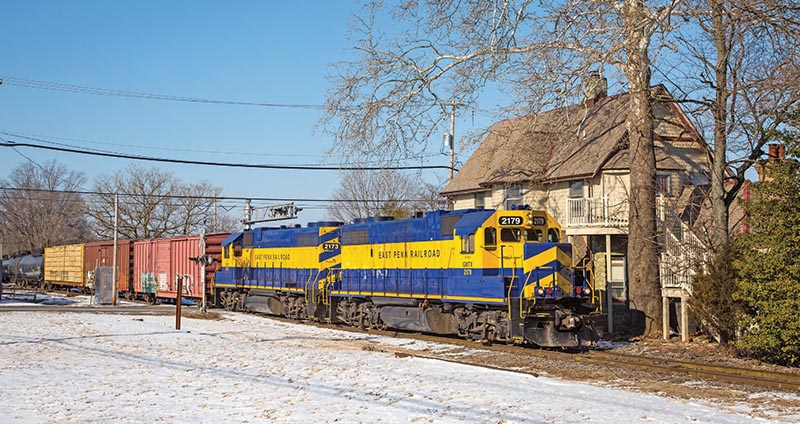 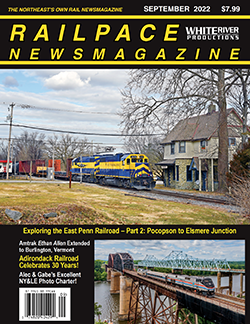 We explored the east-west “Octoraro Line” of the East Penn Railroad in the June 2022 edition of Railpace. This month we resume our journey, focusing now on the north-south, former Reading Railroad Wilmington & Northern line extending from Pocopson, Pa., south to the CSX interchange at Wilsmere Yard in Elsmere, Del., just north of Wilmington. A future Part 3 in our October edition will review operations and photo ops on the scenic former W&N line northward from Pocopson to Modena, just south of Coatesville, Pa.

While Kennett Square, Pa., along the east-west Octoraro line, is the headquarters, diesel shop and crew sign-up base for the East Penn, the primary “yard” and area where most drilling occurs is to the north, on the W&N line, at Pocopson. 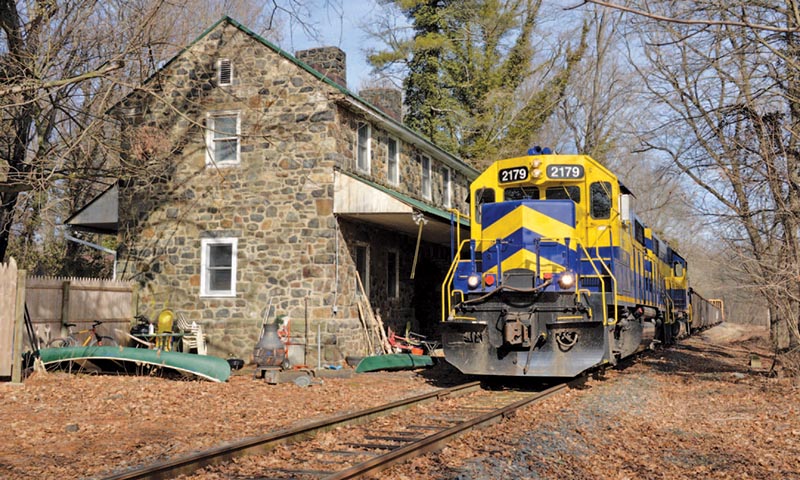 ABOVE: An East Penn train passes the former Reading Company passenger station at Cossart, Pa., just north from the Delaware/Pennsylvania state line, as it rolls south on the former W&N Branch. The crew has cars destined for interchange with CSX at Wilsmere Yard in Delaware, February 10, 2015. The optimum photo opportunities along Creek Road between Chadds Ford and the state line are at Cossart, just north or south of the station. —Michael S. Murray

The first order of the day is determining where the power is, and where the crew will begin their day working. As noted in Part 1 of this serial, the crew can depart with train from Kennett Square west toward Avondale/Nottingham on the Octoraro line, or east from Kennett Square to Chadds Ford Junction, then north to Pocopson Yard. They do not reverse direction at Chadds Ford to head south.

The crew can also be vanned from Kennett Square to Pocopson to begin their day there. If this is the case, the engines will be visible parked at the Route 926 crossing by the Ace Hardware store.
The most common scenario, especially on Mondays, is for the crew and train to originate at Kennett Square 9:00 a.m. and run to Pocopson, where they will spend an hour or more switching the small three track yard. 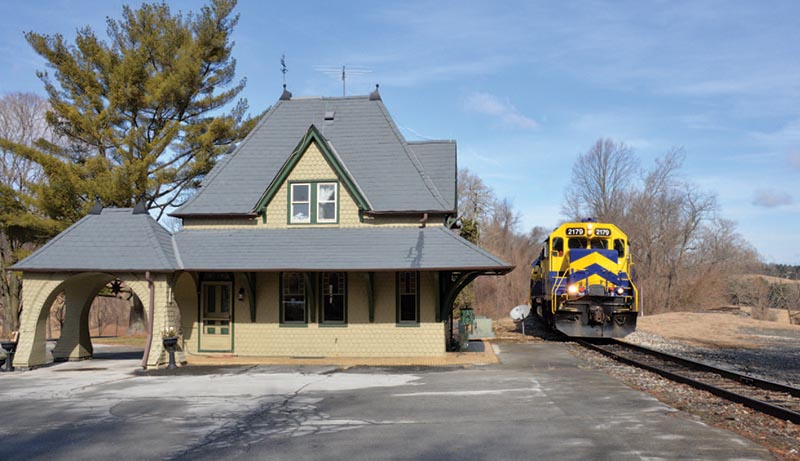 ABOVE: The East Penn train passes the former private passenger station on the DuPont family’s Winterthur Estate as its makes its way south en route to interchange with CSX at Wilsmere yard, February 10, 2015. The station is accessed from Clenny Run Road. —Michael S. Murray

Following the Job South from Pocopson
The East Penn Railroad’s W&N line, which is the former Reading Wilmington & Northern Branch follows the Brandywine Creek from Coatesville to the Delaware state line. The roads which follow the creek are narrow, often winding, and offer few places for getting a vehicle off the road to park. Notice the prevalent no parking signs. It is largely a well-to-do area, and strange cars parked on any road will be noticed.

Departing Pocopson, the ESPN train passes thru an area known as Brinton Bridge. Many years ago there once was a bridge over the Brandywine Creek, which is the reason for the name of the road. The Brandywine can be seen from the road, and over the years it has flooded often. 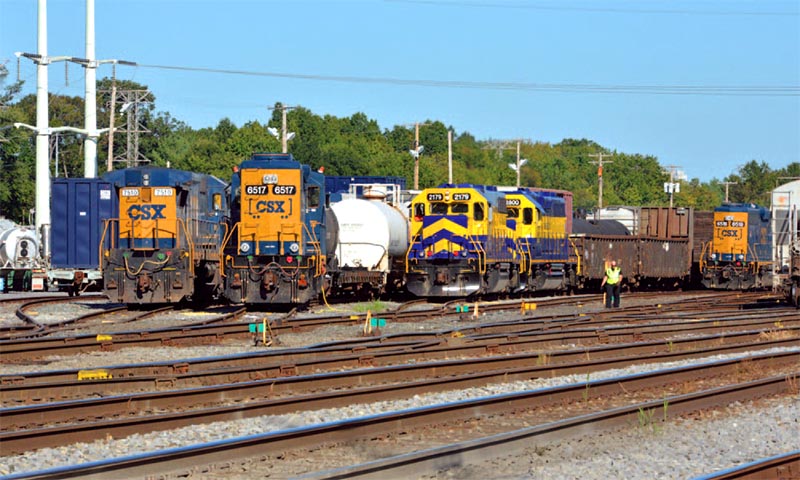 ABOVE: After dropping off the inbound consist, the East Penn crew works the west end of CSX Wilsmere Yard, building its outbound train before reversing its steps to Elsmere Junction and the return to the home rails on the former Reading Wilmington & Northern Branch, October 6, 2015. This view is from the Centerville Road grade crossing. —Michael S. Murray

When following the train, pace yourself so that you can make a quick stop, grab your shot, and continue on, since parking is such a challenge. Several photo angles are available in both directions along the stretch of Brinton Bridge Road.

Continue on Brinton Bridge Road to U.S. 1 Baltimore Pike. Turn left (east) on U.S. 1 to arrive at the grade crossing about the time the train gets there. After the train passes, continue across the track on U.S. 1 about one quarter mile to PA Route 100 south. Turn right onto 100 south and follow south to the bridge over the Brandywine Creek and the track, after which the railroad will be on your left…

Read the rest of this story in the September 2022 issue of Railpace Newsmagazine. Subscribe Today!

The SEPTA Board approved measures that will allow for significant advances to two major initiatives of SEPTA Forward, the Authority’s Strategic Plan – King of Prussia Rail (KOP Rail) and Trolley Modernization.

As part of Amtrak’s vision for the future, Amtrak has pledged to achieve net-zero greenhouse gas emissions across the Amtrak Network by 2045. This net zero emissions target focuses on expanding efforts across Amtrak’s entire carbon footprint to reduce environmental impacts from operations while safely moving people.