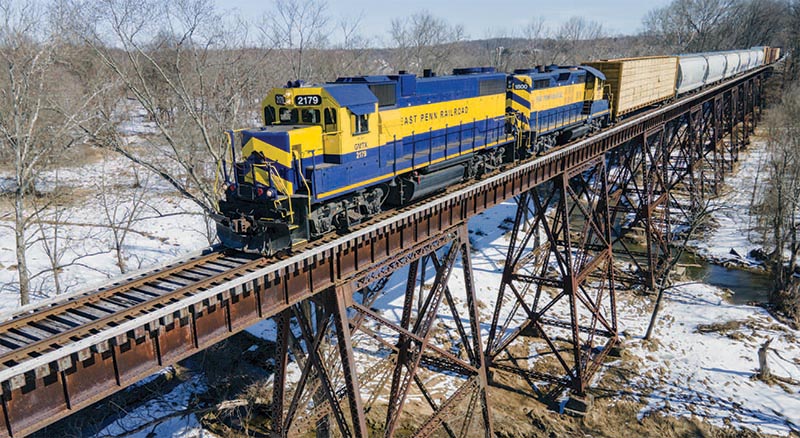 Elk View Trestle, located between Kelton and the town of Lincoln University, is the signature photo location on the east-west Octoraro line. Tree growth and housing development has encroached on the former PRR trestle during the past several decades, but a drone can provide a clear view, as shown February 25, 2021. —Richard W. Jahn 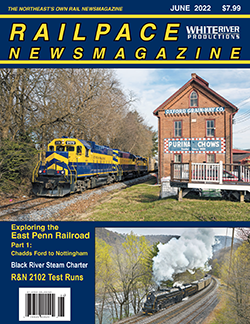 Today’s East Penn Railroad (ESPN) Octararo operations are based out of Kennett Square, Pa. The main office and maintenance shop is located on South Broad Street. ESPN owns the trackage, which was previously a SEPTA property, and which has had various designated operators including the Octoraro Railroad, Delaware Valley, Brandywine Valley, and Morristown & Erie. The line is the former Pennsylvania Railroad Octoraro Branch, which at one time extended west to connect with the PRR Port Road at Rising Sun, Md. Today the track extends from Chadds Ford Junction on the east, through Kennett Square and Oxford, terminating at Nottingham, Pa.

Operations
Operations on the Octoraro Branch vary from day-to-day. Commonly, operations begin in Kennett Square, but the crew may be driven to several other locations where the train may have been left the day before, these include Avondale and Oxford on the Branch, or at Pocopson on the north-south W&N line, or even near CSX Wilsmere Yard in Wilmington, Delaware. Thursdays are usually a good day for a run west to Oxford/Nottingham. The best information about the day’s operation is gained from the East Penn Railroad Facebook page. Do not call the railroad. Listen in on frequency 159.8625 MHz. 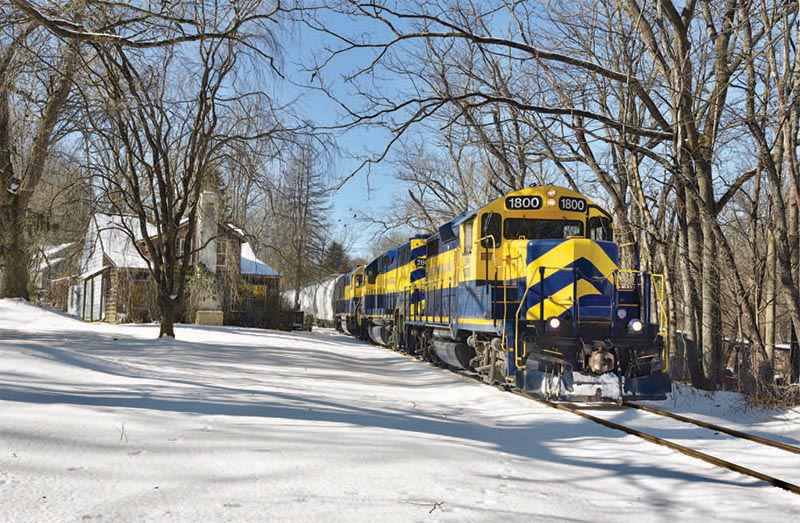 East Penn operations are strictly Monday through Friday, generally in daylight hours. On a weekday morning when the train starts in Kennett Square to head east, the engines will run a half mile west of the office to couple onto the outbound train sitting on the main. The crew will proceed east past the office through a congested area toward Rosedale. Your first available photo op outside of Kennett Square is at the Rosedale Road grade crossing east of Kennett Square, which works well with morning light. The train then runs through woods to Rosedale, where a photo is availble from the Norway Road grade crossing at milepost 31 in the morning. Views here illustrate the undulating profile of the line. Train speed is low due to the grades.

Continuing east, cross busy PA Route 52 at Mendenhall where the grade crossing does not offer a good photo, but a photo can be had behind the pizza shop among the group of stores.
East of Mendenhall, follow Hillendale Road to Chadds Ford Junction, where the former PRR Octoraro Branch now joins the north-south, former Reading Wilmington & Northern Branch. The train swings north and continues to Pocopson. In a furure edition of Railpace, we will cover ESPN operations on the north-south W&N Branch. 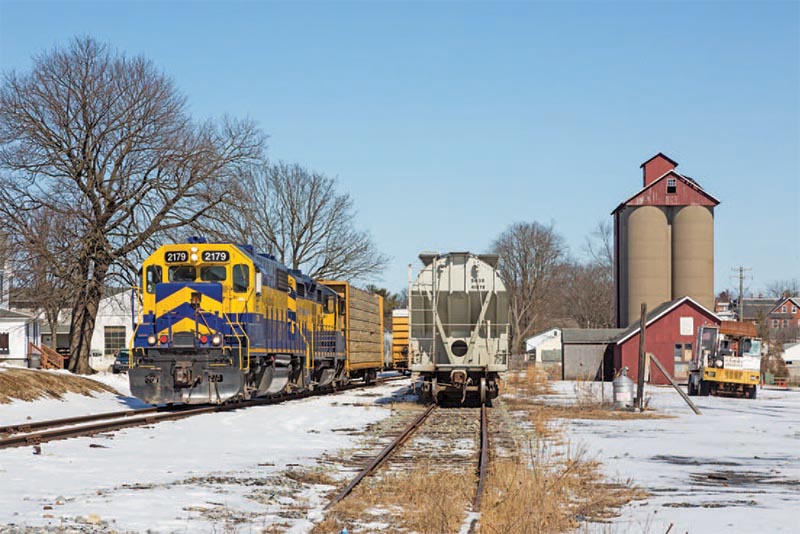 Westbound OCT 25 has stopped to switch in Oxford, Pa., at 12:03 p.m. February 25, 2022. The crew will position one of the locomotives behind the lumber car to navigate the facing-point switch at its next stop, Hoover Treated Wood Products, a mile west of here. —Jim Kleeman

On a morning when the train is not going east, the engines and train may be found either at Kennett Square or at Avondale. If the train is at Kennett Square, it will proceed west to Avondale and spend at least an hour switching customers that comprise a large portion of the railroad’s business. The primary chase road is Baltimore Pike, which is the former U.S. Route 1…

Read the rest of this story in the June 2022 issue of Railpace Newsmagazine. Subscribe Today!