Wabtec Corporation  and Rio Tinto announced an order for four FLXdrive battery-electric locomotives to support sustainable operations of the mining company’s rail network in the Pilbara region of Western Australia. The 100-percent, battery-powered locomotive will help Rio Tinto’s effort to achieve a 50-percent reduction in Scope 1 and 2 carbon emissions by 2030.

Wabtec will deliver the FLXdrive battery locomotives to Rio Tinto in 2023. The mining company plans on using the locomotives in multiple applications including as a shunter in the railyard and ultimately in mainline service. In mainline operations, Rio Tinto currently uses three diesel-electric locomotives in a consist to pull trains with 240 cars hauling about 28,000 tons of iron ore. The FLXdrives will transition from the diesel locomotives in mainline service to form a hybrid consist, and recharge during the trip through regenerative braking and at charging stations. Wabtec’s next generation energy-management software system will determine the optimal times to discharge and recharge the batteries along to route ensuring the most fuel-efficient operation of the entire locomotive consist during the trip. 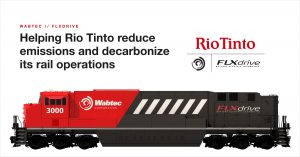 Wabtec continues to build momentum in the mining and rail markets for the FLXdrive battery locomotive. The FLXdrive is the world’s first 100-percent, battery-powered locomotive, and part of Wabtec’s goal to develop the next generation of zero-emission locomotives. The company has a clear path in the rail industry to power new locomotives – and repower existing locomotives – with batteries, hydrogen internal combustion engines, and hydrogen fuel cells. It is part of Wabtec’s vision for the rail industry to play a key role in building a clean energy economy and will enable the reduction of up to 300 million tons of global carbon emissions.