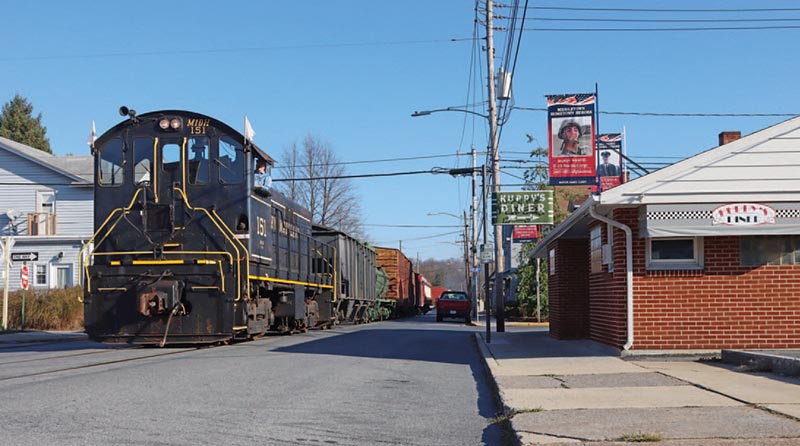 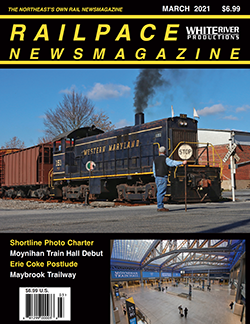 Dave Blazejewski/photos by the author

This was a first! I arranged my first-ever photo charter for a private group of friends on the Middletown & Hummelstown Railroad totally on a whim. This came about because of my unending quest to photograph as many street-running railroad scenes as I can find. My friend Jacob Rink had posted photos of the M&H’s freight run which piqued my interest. Given how irregular their freight moves down the street are, and how far away I live, I wondered if instead of leaving it to chance, if I could just pay them for a street run for myself. This led to a query to the railroad, and before I knew it, I’d rented the railroad for the day!

The price was a bit steep just to pay for my own photos, but reasonable enough that if I split the cost with friends we could all share in the experience, and before I knew it, I was selling tickets! Considering how challenging 2020 has been for everyone professionally and emotionally, the chance to get out-doors in fresh fall air and share some laughs and camaraderie in a reasonably responsible, socially-distanced manner was just what everyone needed. 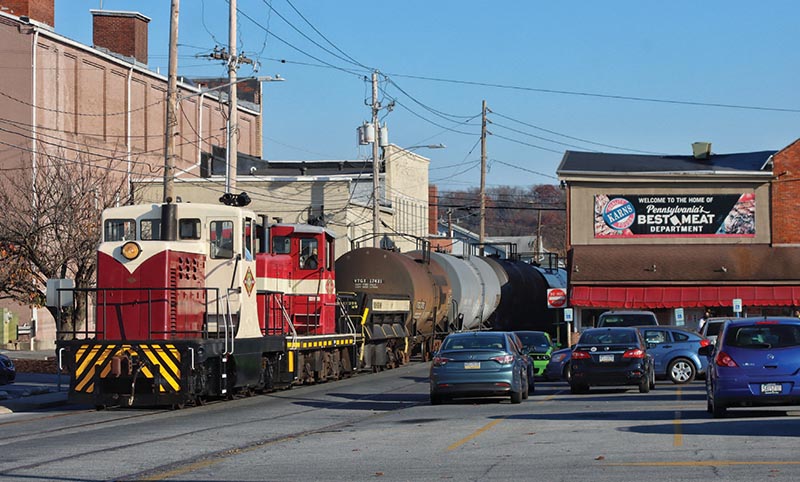 A pair of General Electric centercab 65-tonners lug a seven car freight toward the Norfolk Southern interchange located at the connection with Amtrak’s Harrisburg Line. They have one side dump hopper and six loaded tanks behind them as they came up Brown Street dodging traffic coming and going from busy Karn’s Grocery. Seeing two classic GE switchers double-headed on revenue freight was an added bonus and a true highlight of a spectacular eight-hour day out on the rails of the friendly Middletown & Hummelstown Railroad.

Per the railroad’s website, the original Middletown & Hummelstown Railroad Company was formed in 1888 by local businessmen. Construction of the line between its namesake boroughs was completed in 1890. From then until 1976 it was part of the Philadelphia & Reading Railroad, later the Reading Company. In 1976, upon the coming of Conrail, the route was not ed in the USRA’s Final System Plan, and a group of investors saved the line and created the current Middletown & Hummelstown Railroad, nicknamed “The Milk and Honey Line.” Since then, they have operated the seven-mile line between its namesake towns providing freight service, and in 1986 they began offering excursion passenger trains which have continued for more than three decades.

Freight service is provided to a Univar facility in Middletown that is currently the line’s only regular active customer, generating several hundred carloads a year. The remainder of the line as far as the bridge over Swatara Creek sees only the passenger trains, and the last mile or so into Hummelstown has been out of service since 2011 when Tropical Storm Lee washed out a short stretch of trackage just north of the river bridge…