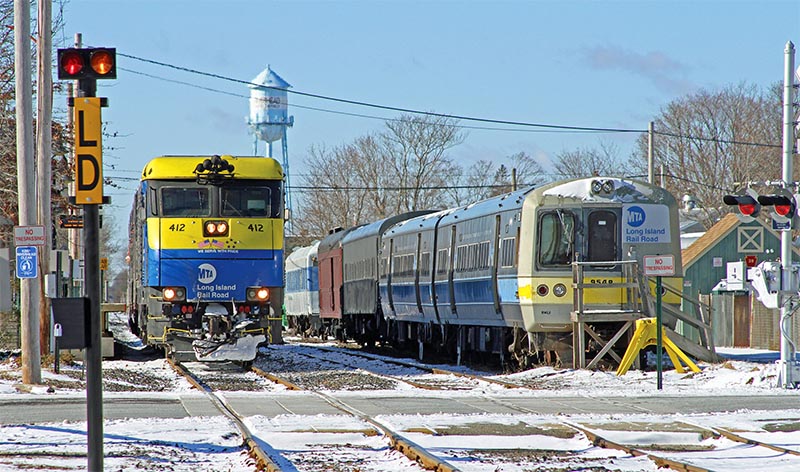 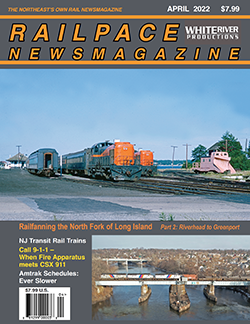 By Andrew Grahl and William J. Skeats/photos as noted

We return to the North Fork of Long Island to finish our coverage of the Long Island Rail Road’s Main Line from Riverhead east to Greenport. As discussed in Part 1 in the March edition of Railpace, LIRR runs an iconic “Scoot” passenger train, which makes several daily round-trips across the North Fork of Long Island between Ronkonkoma and Greenport. In this feature, we will focus on the section of track from Riverhead, the seat of Suffolk County, to the pierside bumping block in the Village of Greenport at the Peconic River. In addition to the LIRR, the New York & Atlantic Railway currently operates freight trains as far east as Riverhead in the coverage area of this feature. 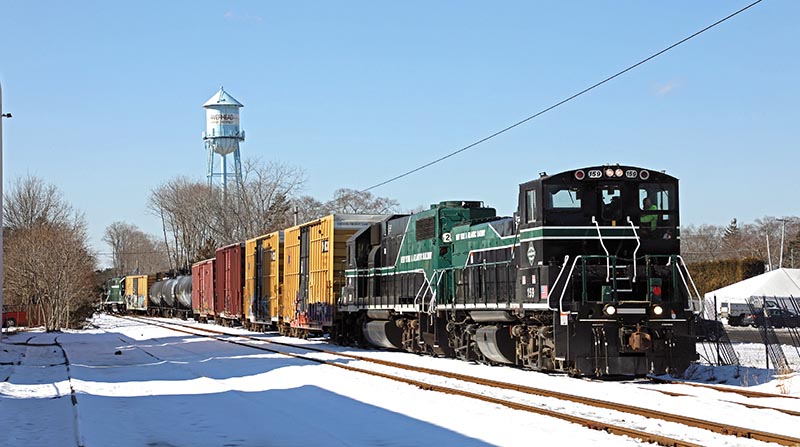 History
Searching for a fast route between New York and Boston, The Long Island Rail Road was chartered on April 24, 1834. The LIRR leased the Brooklyn & Jamaica Rail Road and built east to Greenport, on the northeastern tip of Long Island. An inaugural trip to Greenport was made July 27, 1844, with passenger service beginning two days later. Ferry service across Long Island Sound to Stonington, Conn., began shortly after, with railroad connection to Boston.

The Metropolitan Transportation Authority’s Long Island Rail Road today provides frequent electric (EMU) train service from Penn Station in Manhattan and Atlantic Terminal in Brooklyn to Ronkonkoma over the Ronkonkoma Branch, also called the Main Line. The subject of this article, the Greenport Branch, is the non-electrified manual block portion of the Main Line east of Ronkonkoma, which is operated as its own separate branch between Ronkonkoma and Greenport, a distance of 45.8 miles. 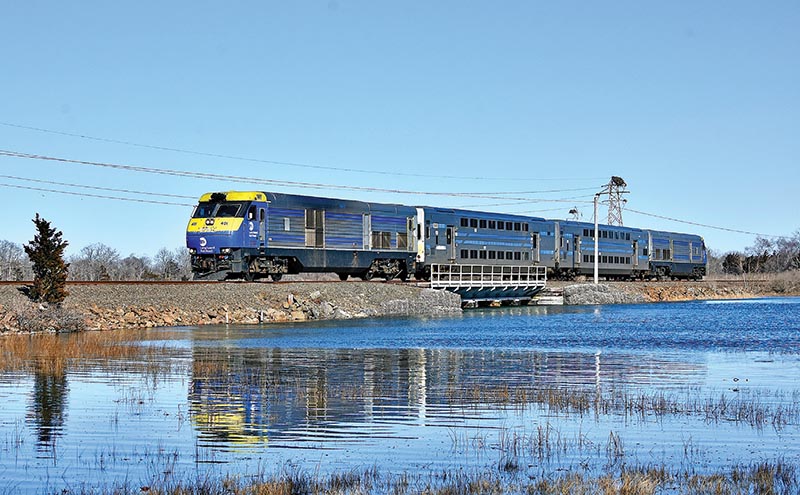 ABOVE: Hashamomuck Pond is located in the middle of Southold Town’s 53.8 square mile Paul Stoutenburgh Preserve, part of the Long Island Pine Barrens Maritime Preserve, which is protected wetland. Hashamomuck Pond empties through Mill Creek into Shelter Island Sound in the Town of Southold on the North Fork of Long Island. It is a very important wildlife wetland where ospreys nest on platforms at several locations in the pond to utilize the pond and marshes for feeding. Scoot train 6251 is heading west back to Ronkonkoma, viewed from the west shore on January 30, 2021. DE30AC 401, cab car 5021, C3 bilevel 4078, and DE30AC 412 are passing over the bridge at MP 92 on the Long Island Railroad Main Line. Two Osprey nest platforms are seen on the high tension towers above the second coach of the Scoot. —William J.Skeats photo

Schedule information for service east of Ronkonkoma is found in the Ronkonkoma Branch timetable. Short (usually two-car) LIRR diesel trains serve the communities along the North Fork in Suffolk County. Freight customers are served by the New York & Atlantic Railway, an affiliate of Anacostia & Pacific Company. The LIRR operated its own freight trains until May 1997, when freight operation was put out to bid. Anacostia & Pacific won a 20-year contract, which was renewed in 2017 for an additional ten years, expiring in 2027.

The Greenport Branch
From Ronkonkoma east to Greenport, the single-track line operates in “dark territory”, without conventional signals. Rule 251 is in effect from Ronkonkoma to Greenport. There is no signal circuitry east of Ronkonkoma, and the train crew will radio Jamaica Control Center (JCC) Divide, which is actually the Divide console at the JCC and get paperwork to operate across the dark territory, divided into blocks and governed by Block Limit Signals. PTC is in use in this dark territory as well as along all of the LIRR’s branches…

ABOVE: LIRR DE30AC 406 poses at the bumper block at the Greenport terminal, on February 8, 2021. The LIRR station, which opened in 1892, is now the East End Seaport Museum, located adjacent to the Shelter Island Ferry. Greenport, situated 94 railroad miles from Long Island City, is a fascinating village filled with activities, shopping, many restaurants and a second display site for the Railroad Museum of Long Island. —Andrew Grahl photo

Read the rest of this article in the April 2022 issue of Railpace Newsmagazine. Subscribe Today!