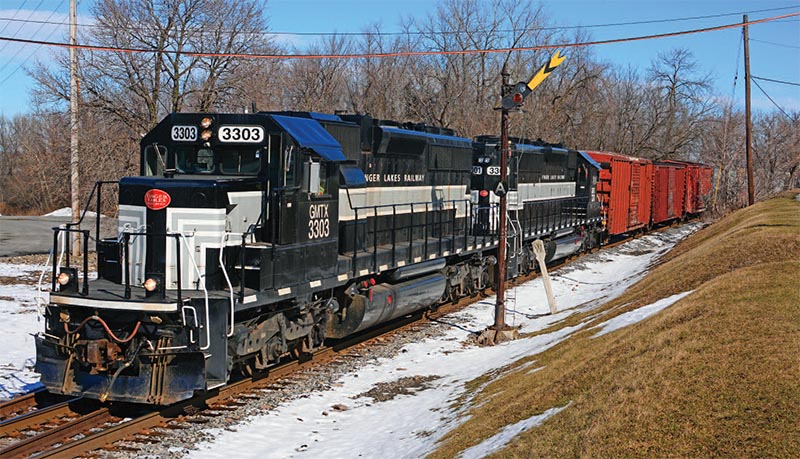 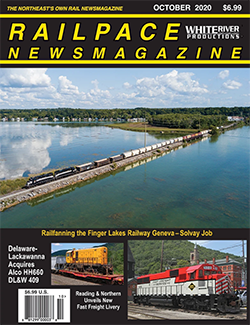 by Charles Rothbart/photos as noted

In a region rich with short lines, the Finger Lakes Railway stands out for its fantastic scenery, its regular operation, and its sharp New York Central-inspired paint scheme. Running primarily on former-New York Central rails, the Finger Lakes presents a somewhat rare opportunity to shoot a vintage paint scheme on its home rails. This livery, combined with a mixed roster of GP38-2s and B23-7s, gives the railway an eclectic, yet modern image, especially amongst the myriad of Alco-powered short lines that surround it.

History
Finger Lakes Railway (FGLK) was founded in 1995 with the sale of Conrail’s Geneva Cluster, which consisted of the remains of the New York Central’s Auburn Road, the Pennsylvania Railroad’s route to Sodus Bay, and sections of the Lehigh Valley’s Buffalo Division mainline. The focus of this feature and photo guide, is the former New York Central Auburn Road.

The Auburn Road, opened in 1838 as the Auburn & Syracuse, extended between Syracuse and Rochester through the towns of Geneva and Canandaigua, and was a part of the first rail line to stretch from Albany to Buffalo. This line would be bypassed in 1853 with the incorporation of the “Direct Railway” which offered a more direct connection between Rochester and Syracuse. Both routes would be inherited by the New York Central when it was formed two months later. The line would continue to serve as a through route until it was severed in the mid-1900s, and would pass through Penn Central ownership into Conrail before finally being spun off as a short line. 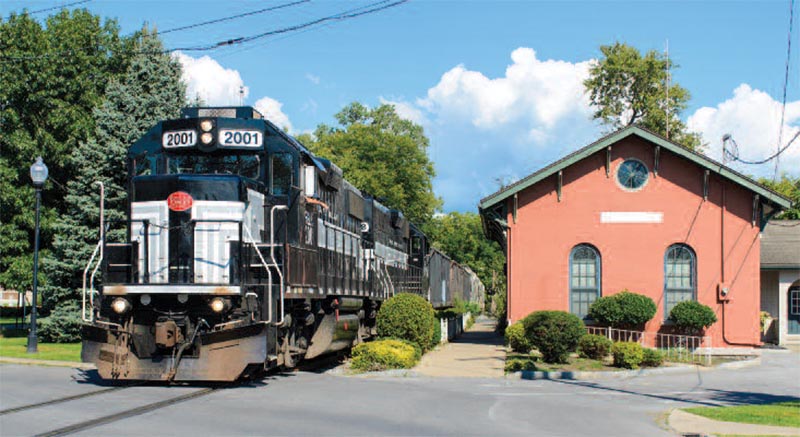 Operations
The primary train over the Auburn Road between Geneva and Syracuse is symbol GS-2. This train operates from the Finger Lakes’ Geneva Yard eastward across the line to Solvay Yard just west of Syracuse, where it returns to Geneva.

Geneva is the Finger Lakes interchange point with Norfolk Southern, which runs an interchange job from Corning, N.Y., north to Geneva. For more information about this job, see the March 2020 Railpace. Finger Lakes also interchanges with CSX. However due to NS ownership of the Corning Secondary from Geneva north to Lyons, CSX interchange is forced to be in Solvay, N.Y. Thus, Train GS-2 runs six days a week both to service the Finger Lakes’ Auburn Yard and to handle traffic going to and from CSX.

Call time for Train GS-2 is Monday–Friday, usually 11:00 a.m. GS2 also runs Sunday with an earlier call time of 7:00 a.m. While these call times can vary, they are fairly well adhered to. All runs are in daylight, and are well worth the chase, however the earlier start of the weekend run generally means that it will run in good light as it returns west, which can be a problem with the weekday runs. Total time for the round trip is usually about 7 hours. 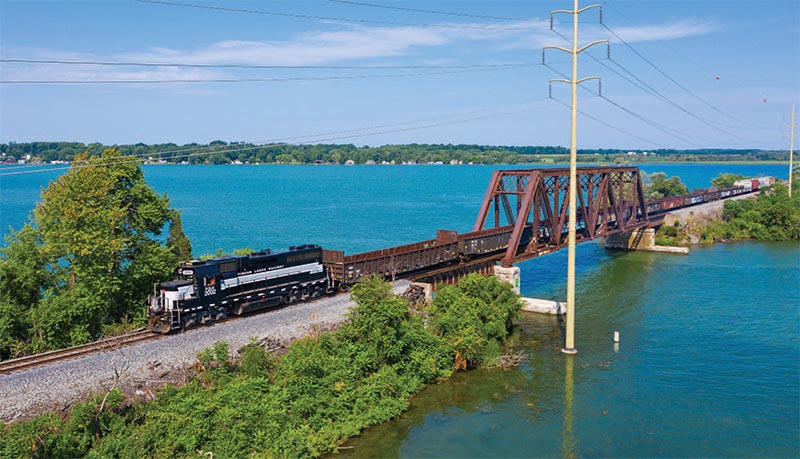 The Sunday morning Finger Lakes Railway Train GS-2 is led by solo GP38-2 2002 as it makes its way across the Cayuga Lake causeway in this aerial view July 19, 2020. A truss bridge allows for small boat traffic to pass through. Cayuga Lake is the longest of the Finger Lakes in this region of New York. Joseph Cermak photo

Finger Lakes Railway has operated a variety of units throughout its history, however recently it has thinned its roster. Power consists primarily of GP38-2s and B23-7s. Most are are in corporate paint, however there are a few left in the schemes of their previous owners. One U23B is painted in a Lehigh Valley tribute scheme. Given the age of the equipment, and generally small pool of power, units come and go off the active roster.

Train GS-2 generally operates with 2 to 3 GP38-2s. However this job is not the sole domain of Geeps, and B23s will occasionally see use, especially if Geeps are needed for other duties. Dash-7 runs are becoming increasingly rare. Power for the train is generally arranged with short hoods out, in either direction. Finger Lakes also does a commendable job of keeping their units clean and presentable, despite years of use.

There are several other jobs on FGLK. These include Geneva based jobs, including yard job GY-1, Canandaigua job GC-2, and Himrod job GH-2. There is also a yard job AY-1 in Auburn, and SY-1, which is the switch crew in Solvay. Crews will also run to Victor and Kendia over the former LV on an as-needed basis. The existence of the three yard jobs means GS-2 does not have to do much switching during its run, and mostly just sets out and picks up cars at each yard along the way. They will, however, perform occasional switching at certain industries outside the area of coverage of these yard jobs.