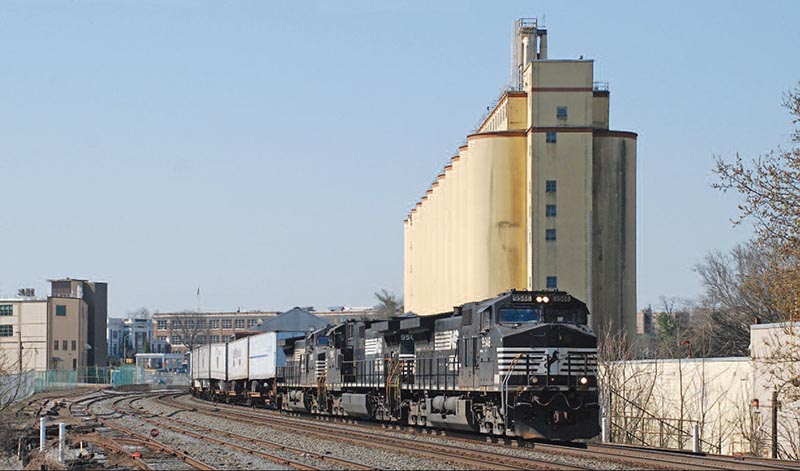 With a combination of TOFCs and COFCs, Norfolk Southern Train 20K is led by NS 9546 and heading east on this April 14, 2018 Saturday morning. It is easy for one to visualize what an important cog the railroad was in contributing to Hershey’s economic well-being whether it was transporting coal or the ingredients for making chocolate. 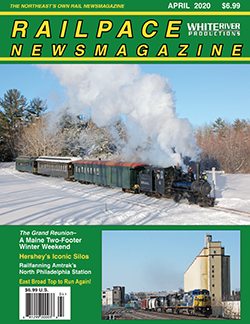 By Thom Horvath/photos by the author

This writer vaguely recalls the first time he came to gaze upon Hershey’s cocoa bean silos. May 20, 1997 was the date that found Ringling Brothers, Barnum & Bailey’s Red Unit Circus Train (RUCT) arriving in Hershey, Pennsylvania, to open its Memorial Day engagement at Hersheypark Arena. I drove out to wait for RUCT’s arrival at the Derry Road grade crossing, and two elements immediately got my attention: one was the aroma of chocolate that permeated the air; the second was those imposing cocoa bean silos just west of the grade crossing. They dominated the adjacent landscape with their light color, imposing height and sheer size.

Since that initial trip to Hershey in 1997, I have returned to this location a number of times to incorporate that iconic landmark into my railroad photography. Morning trains are ideal for getting the best images of the silos looming over an eastbound train. Norfolk Southern’s black diesels stand out quite nicely against the tan colored silos. It was during a lull in trains one day that I pondered the history associated with this massive structure. How tall was it, when was it constructed, and how many bags of cacao beans can one silo hold, were all questions that sparked my interest.

Presently there are twenty-four silos that measure thirty feet in diameter and stand 130 feet tall. Six lower “star silos” are nestled in the center of those rows. According to a local newspaper’s 1950 account, construction began when “Two hundred twenty-five men poured concrete day by day, 24 hours a day, from Monday, August 14, starting at 8:00 a.m., and it required until Thursday morning, August 24, to complete the 16 silos the Hershey Chocolate Corporation has been building to store cacao beans…” To answer the question regarding how many bags a silo can hold, that would be 400,000 bags of cacao beans. Each bag can hold 140 pounds of beans. 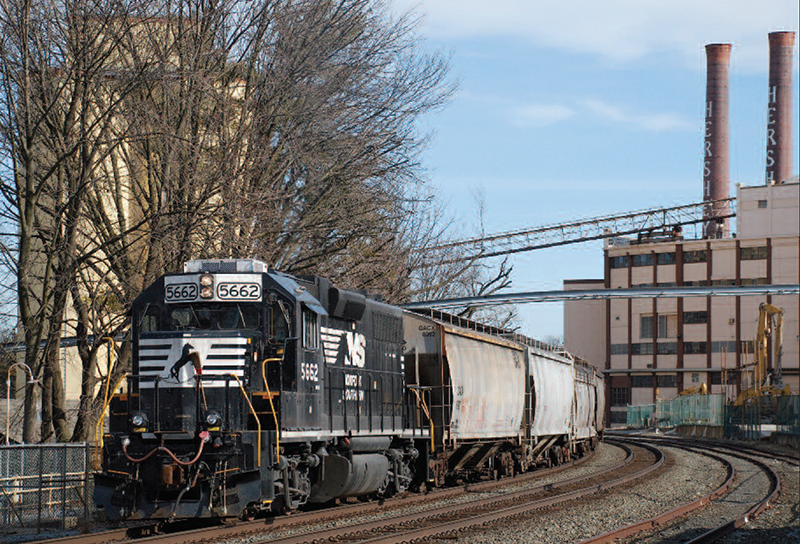 Even on this February 10, 2013 day, the silos are still an imposing structure. Off to the right can be seen some of the production plant. On this Sunday morning demolition equipment stands idle, but come Monday morning their work in demolishing Hershey’s downtown plant will continue. The top steel structure spanning the tracks is what remains of the bean conveyor; the steel beam below the conveyor is Hersheypark’s monorail track. Norfolk Southern GP38-2 5662 leads H2A west with a consist of covered hoppers.

The 1950s silos were built to provide a facility to store additional beans to take advantage of price fluctuations of cocoa beans. In 1957, the Hershey Company had eight additional silos constructed. This allowed them to increase their storage capacity of cocoa beans from sixty million to ninety million pounds of beans. That is equivalent to producing 5.5 billion chocolate bars!

Preliminary work at the site began with the relocation of Spring Creek thirty to forty feet from its present location. It would also be walled to prevent any erosion that might occur during rainy periods. In addition, a bridge was built to span Spring Creek to allow trucks to be used in construction of the silos. Once the project was completed, that bridge would then be used for Hershey’s general trucking purposes. With those steps completed, excavation for the sixteen silos began in November, 1949…