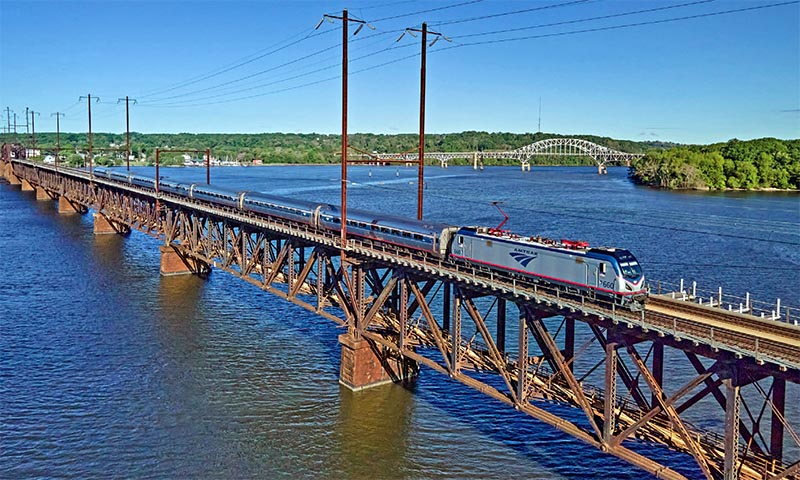 Amtrak train 56, the Vermonter, heads north across the Susquehanna River in this aerial view May 6, 2021. The graceful arch of the U.S. 40 highway bridge can be seen in the background. 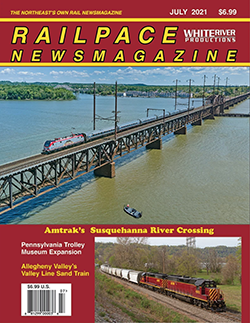 by Gary Pancavage/photos by the author

One of the most critical pieces of infrastructure on the Northeast Corridor is the massive viaduct that carries Amtrak’s main line across the Susquehanna River. Situated at the head of the Chesapeake Bay, the 4100-foot long Howe deck truss bridge contains eighteen spans with a movable swing portion in the center. Supported by stone piers, it stretches across the water from Perryville to Havre de Grace, Md., through some very scenic water level territory.

The history of this magnificent span dates back to the mid-1860s when the Philadelphia, Wilmington & Baltimore Railroad built a single-track wooden bridge at this same location. Iron reinforcements were added shortly thereafter, and the stone piers that supported the original structure still remain today. When the Pennsylvania Railroad took control of the PW&B, a new span several yards upstream was built between 1904 and 1906. Catenary was installed in 1934 as part of the expansion of PRR’s massive main line electrification south to Washington, DC, and regular electrified passenger service began in February 1935. Ownership of the bridge remained with PRR, then transferred to Penn Central in 1968, before it was passed on to Amtrak in 1976. 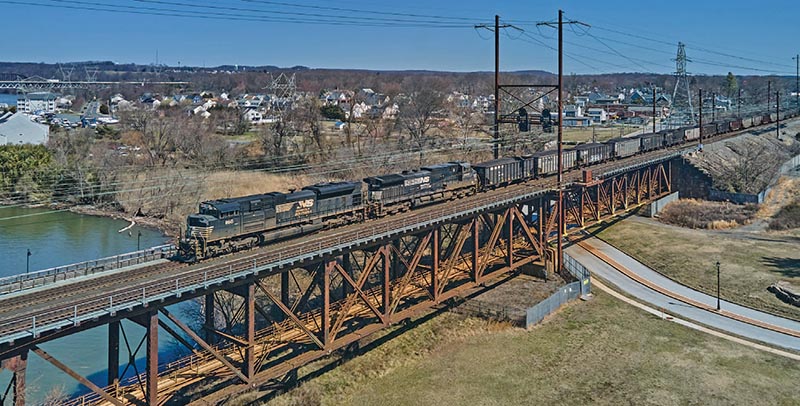 ABOVE: Norfolk Southern loaded coal Train Y90 is coming off the Port Road headed for Baltimore in this aerial view March 20, 2021. Export coal to the Port of Baltimore has been running heavy for the past several months.

Prior to the adverse effect of the pandemic on travel, nearly one hundred trains from Amtrak, MARC, and Norfolk Southern crossed the structure each day. Even with today’s reduced traffic levels, it is still a very active location. Freight trains use this route to reach the port of Baltimore and generally run at night to avoid congestion with passenger moves, but it is not uncommon to see one during daylight hours. MARC weekday commuter trains utilize the Susquehanna crossing to reach their station at Perryville, which sits on the northern-most edge of the MARC Penn Line. They are most active during morning and evening rush hours, with only one inbound arrival mid-day. No MARC equipment lays overnight at Perryville; it all returns south…

Read the rest of this article in the July 2021 issue of Railpace Newsmagazine! Subscribe Today!