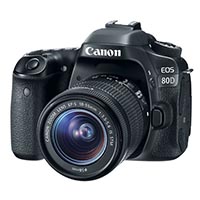 Railroad photography is an exciting and enjoyable avocation, and no doubt you’ve seen shots that “knock your socks off!” while other photos seem washed-out, under-exposed, or “flat” with low contrast and detail. This discussion will focus on the generally poor results obtained when shooting in mid-day, high-angle sun during the longer days of the year. Commonly known as “High Angle” (and derisively known as “Half-Assed”) lighting, or H.A., this occurs in the northern hemisphere during the longer days of the year, from late April to early September, with the crescendo of harsh mid-day overhead lighting occurring on June 21, the longest day of the year. As the earth tilts on its axis as the seasons progress, the apparent angle of the sun above the horizon increases from December 21 until June 21, then decreases from June 21 until the shortest day of the year, December 21. Contrary to popular myth, “direct overhead sun” is never really directly overhead. At 40 degrees north latitude (in the New York City area), the sun never does get to 90 degrees overhead, rather it reaches a mid-day maximum of 72 degrees elevation above the horizon on June 21—but the mid-day maximum is only 25 degrees above the horizon on December 21!

What this means for railroad (or any other outdoor) photography is that in mid-day, during the longer days of the year, the sun is more over-head than during the shorter days; during the summer this produces less desirable side illumination on three-dimensional subjects. In simpler terms, that means the running gear/trucks under locomotives are often in shadow, the sides of buildings (especially under the eaves) are in shadow, and even the “sunlit” side of rolling stock and buildings appears shadowed, grayed-out. with low contrast. Colors are muted, not intense. 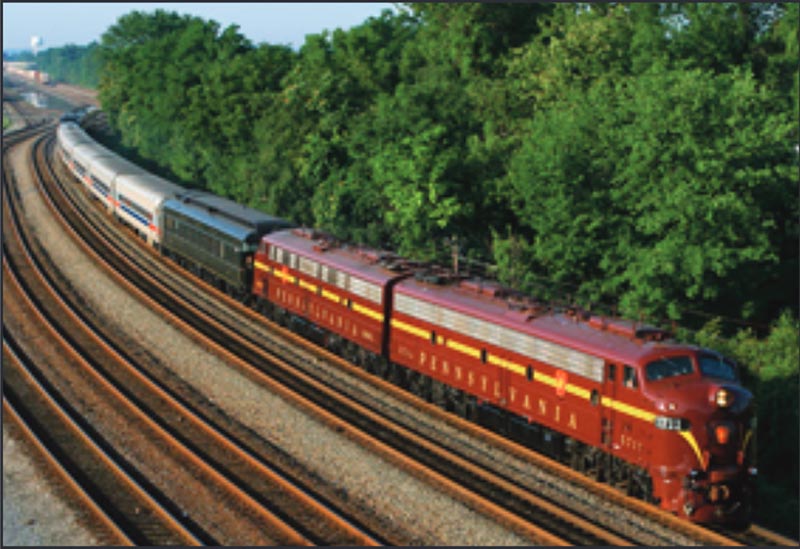 Compare the color of Pennsylvania Railroad Tuscan Red on the Juniata Terminal E8s photographed 90 minutes after sunrise, and again at 1:00 p.m. on the same summer day (July 7, 2007). Also compare the underframe (truck) lighting, as well as the green of the trees, and other colors. This is not a criticism of any photographer’s efforts or ability, rather, an analysis of different light quality and color temperature, due to the time of day. 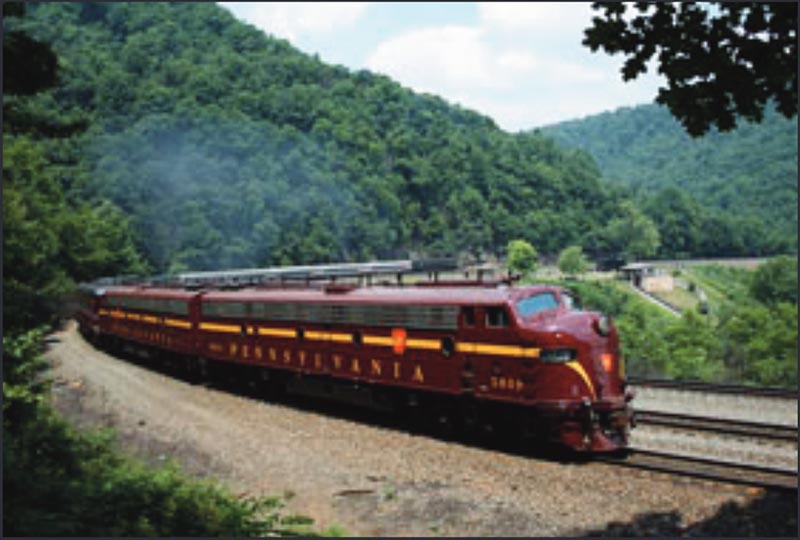 During the longer days of the year, “mid-day” is actually 1:00 p.m.due to Daylight Saving Time, and during the most egregious months of high overhead sun, June and July, the “HA” period extends at least from 11:00 a.m. through 3:00 p.m. Some photographers argue that the H.A. period is even longer, perhaps 10:00 a.m. until 4:00 p.m., before and after which really “sweet light,” created by lower-angle sun illumination, is available.

From Bad To Worse
Some of most difficult subjects to photograph during summertime mid-day H.A. are dark colored,such as NS diesels. Steam locomotives are even more difficult, because of their rounded shape; the lower running gear disappears into dark shadow with little detail visible. Out on the line, the worst possible mid-day scenario is a northbound train,which is lit neither on thenose nor either side, a dark “blob” photographically. Strive for trains running southward,and consider an elevated vantage point, minimizing the view of the underframe, while maximizing the view of the roof or top, which is generally better illuminated.

Many railroad photographers consider the best quality photos to be available during the”sweet light” periods of early morning and later afternoon during the longer days of the year. Sunlight is “sweet” at all hours during October-March, due to the sun angle being less than 45 degrees above the horizon.

The Bottom Line
“High Angle” sun lighting during the longer days of the year produces low contrast, less color saturation, and terrible underframe detail. Strive to shoot in early morning and late afternoon “sweet light” (6-10 AM and 4-8 PM) when the sun is lower in the sky; the color, contrast, and detail are improved dramatically! Trains and rail events happen at all times of the day, and in all types of weather conditions. But since color space in the magazine is limited, and we are overwhelmed with photo contributions, we generally pick the best-composed and best-illuminated photos for publication.