Union Pacific Railroad  announced two steam engines that are among the last of their kind in existence, including the 1940s-era Challenger No. 3985, will travel from Wyoming to Illinois in November, with other pieces of vintage rail equipment.

Union Pacific donated a small portion of its Heritage Fleet earlier this year to the nonprofit Railroading Heritage of Midwest America (RRHMA), as part of Union Pacific’s continued commitment to preserving this nation’s rich railroad history.

RRHMA plans a multiyear, multimillion-dollar restoration of the equipment, including returning the steam locomotives to operating condition.

“The Railroading Heritage of Midwest America shares our deep appreciation of the role railroads have played and continue to play in building America, and we are proud Union Pacific’s legacy will live on for future generations to enjoy and learn from,” said Scott Moore, senior vice president–Corporate Relations and chief administrative officer.

The donated equipment, which will be towed to Illinois, will leave Union Pacific’s Steam Shop in Cheyenne, Wyoming, on Nov. 11, and will make periodic maintenance stops along the route.

The special train is scheduled to arrive at the RRHMA’s shop in Silvis, Illinois, Nov. 19.

Union Pacific plays a leading role in preserving railroad history and maintains the finest heritage fleet in the world, which includes the world’s largest steam locomotive, the Big Boy No. 4014, and the fastest steam locomotive, the Living Legend No. 844. Each year, Union Pacific proudly sponsors a steam tour, inviting communities and rail fans to whistlestops and displays across its 23-state network to celebrate Union Pacific’s rich heritage and learn about modern rail operations.

A steam tracking map showing locations and route details will be available at upsteam.com 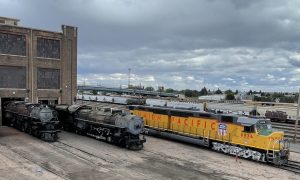