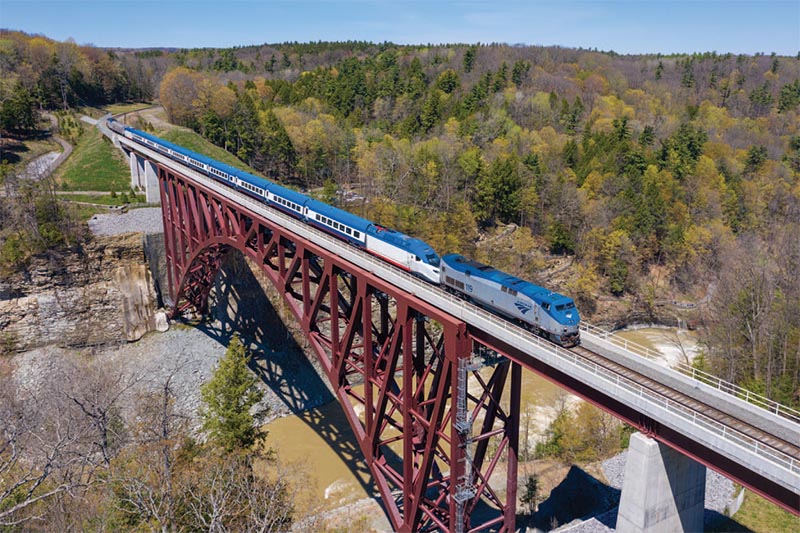 A special Amtrak move soars over the Genesee River as it crosses the Genesee Arch Bridge in this aerial view at the south end of Letchworth State Park in Portageville, N.Y., May 1, 2021. After 14 months of testing at TTCI in Colorado, the next generation Amtrak Avelia Liberty trainset is being moved back to the Alstom Plant in Hornell for interior finishing. The majestic arch bridge, which replaced an 1875 Erie Railroad iron trestle, was opened to rail traffic by Norfolk Southern in 2017. The best photo angles, especially east-bound, are obtained with a drone, although several compositions are possible within the State Park, such as the embankment at the rear of the train, from which the cover photo was taken. —Joseph Cermak 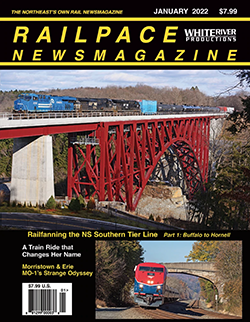 By Paul Stamp/photos as noted

A Brief History of the Line
The Southern Tier Line has its roots in the 1840s, chartered as the Attica & Hornellsville Railroad. The line went through a handful of expansions and name changes before ultimately becoming known as the Buffalo & New York City Railroad. It would continue to operate under that name until 1852, when it was leased and eventually purchased by the New York & Erie Railroad, which would, through some turmoil and ownership changes, eventually emerge as the Erie Railroad. 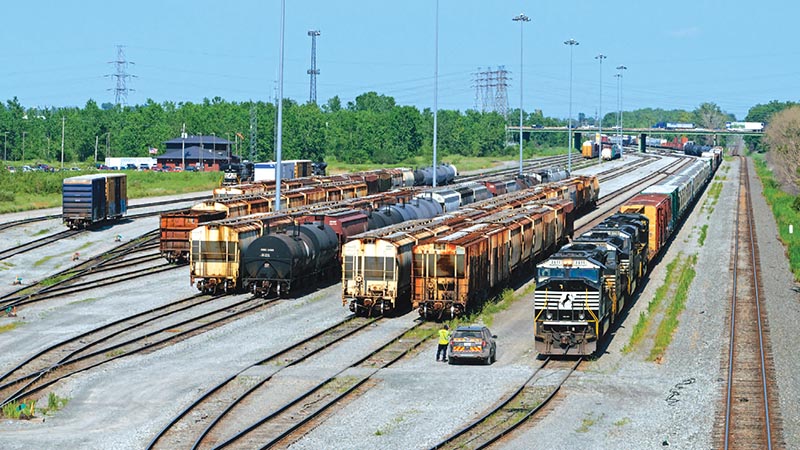 ABOVE: Norfolk Southern manifest freight 309 gets a recrew in Buffalo after running west over the Southern Tier. Leading this day’s train is an SD70M with a Phase-II cab. The new crew will work Bison Yard before continuing west to Elkhart, Ind., August 2, 2019. —Joseph Cermak

Today’s Southern Tier Line would become an integral part of the Erie Railroad system, continuing through the October 17, 1960, merger with the Delaware, Lackawanna & Western, which created the Erie Lackawanna for its brief 16-year tenure. The EL would become a part of the Conrail system on April 1, 1976.

The Conrail era brought many swift changes to the former Erie Railroad system as a whole, including the demise of the main line to Chicago as a through route. Fortunately, the Southern Tier Line did not suffer the same fate. On top of modest Conrail traffic, the line also saw overhead traffic mandated to the Delaware & Hudson (and later Guilford, Canadian Pacific, and New York, Susquehanna & Western). Conrail spent much time and effort single-tracking the Southern Tier Line, including its extension from Hornell to Buffalo, although this also included new rail, ties and ballast, and new signals, some of which replaced iconic Erie semaphores. 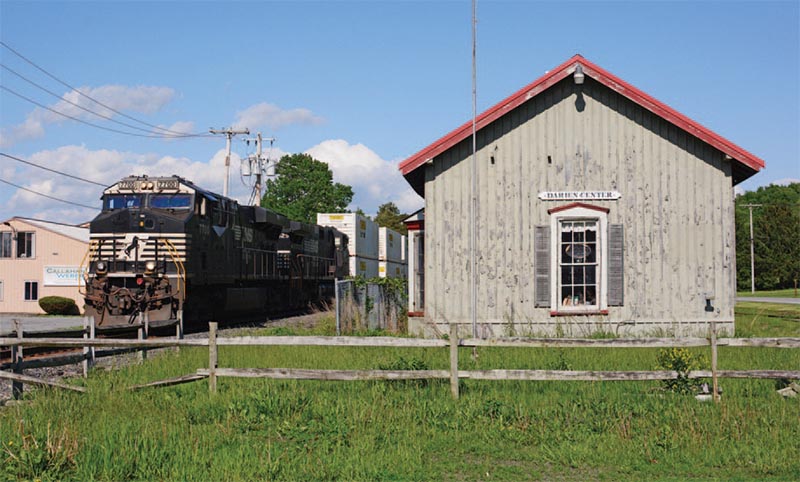 ABOVE: Norfolk Southern ES40DC 7700 is westbound through Darien Center, N.Y., with stack train 205 on June 2, 2019. The station at the Allegheny Road grade crossing provides an excellent photo prop. —Duncan Richards

In 1999 the line would again change hands with the split-up of Conrail, at which time Norfolk Southern took ownership of the line, with CSX acquiring Conrail’s former-New York Central main line to the north. During Norfolk Southern ownership of the line, traffic volume has been a roller coaster ride. During the early part of NS ownership, traffic on the former-Pennsylvania Railroad’s Buffalo Line via Renovo and Olean played a part in reducing freight volume on the Tier. However, in 2007, Norfolk Southern leased out portions of the Buffalo Line to the Buffalo & Pittsburgh, and to the Western New York & Pennsylvania, leaving the Southern Tier Line to absorb a majority of the traffic the Buffalo Line had been carrying. From 2007 to 2017, a good day on the Tier could mean seeing 8 to 10 trains.

Operations Today
In 2021, with the implementation of Precision Scheduled Railroading, traffic volume on the line has been turbulent. Until the beginning 2021, the Southern Tier Line saw just 4 trains a day, most of which ran in darkness. However, with carload volume on the rise, Norfolk Southern has now found it necessary to bring back an additional eastbound mixed freight, bringing the line’s total back up to 5 regularly scheduled trains a day during periods of high volume generally the spring and fall. With this addition, all five trains (22K, 23K, 36T, 309 and 310) have a chance of being partially, or in some cases, a completely daylight run on the Tier. 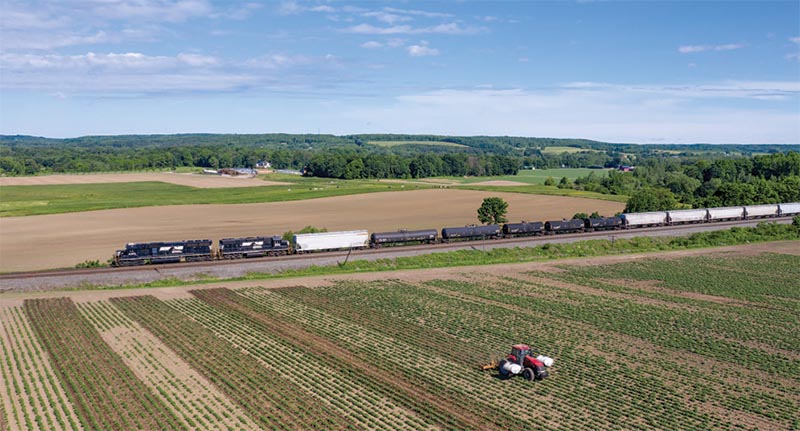 ABOVE: Norfolk Southern Buffalo to Silver Springs local Train H52 easily coasts down Attica Hill at MP 391 as it returns west to Buffalo after interchange with Rochester & Southern at Silver Springs, in this aerial view June 12, 2020. —Paul Stamp

In addition, unit frac sand train 68N, a railfan favorite that commonly utilizes Canadian National power, makes regular trips on the Tier, and with the global shortage of natural gas, it has been running with more regularity. Usually terminating in Gang Mills, Train 68N will sometimes continue east to Binghamton to forward frac sand to short line interchanges in Sayre and Taylor, Pa.

Chasing On the Tier
Of the five scheduled trains, NS 310 and 36T are by far the best bet for running in good light on the Tier. Barring any unforeseen circumstances, 310 typically gets into Buffalo between midnight and 5:00 a.m. While it is tough to pinpoint an exact departure time, 310 typically works Norfolk Southern’s Bison Yard for at least two hours, mean-ing many days, especially during the summer months, it departs just after daybreak. When running during periods of high volume, 36T originates in Buffalo and normally follows a few hours after Train 310, thus if for some reason 310 left before daybreak, there’s another opportunity for a well-lit eastbound on the Tier. The Southern Tier Line officially begins at CP Panama, milepost 419.9.

To avoid the busy streets and traffic lights of Buffalo, a natural starting point for an eastbound chase is in the towns of Alden (MP 405) or Darien Center (MP 399); photos on previous page. A go-to starting spot is the Harlow Road crossing east of Alden, just south of Darien Lake State Park. From here, CP Alden (MP 401) can be seen to the west. While not the most visually stunning location you’ll shoot on the chase, the location offers plenty of room to pull your car off to the side of the road, and view the east end of the Alden/Marilla siding. From Harlow Road, a run to the town of Attica is in order. A right turn onto Route 20, and then an additional right four miles later onto Route 238 East, will bring you down into the bucolic valley town. 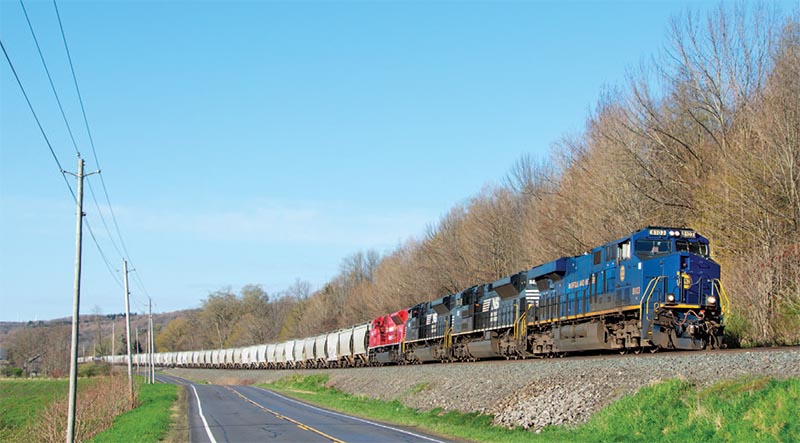 ABOVE: A Colorful lashup is led by Norfolk Southern’s Pevler Blue Norfolk & Western heritage unit as it hurries west on Train 309, paralleling Dale Road in Dale, N.Y., near MP 386. The trailing fourth in this lash-up is a freshly rebuilt Canadian Pacific SD70ACu, May 10, 2020. At this location, the westbound train is oriented northeast, enabling good nose light. —Paul Stamp

Attica offers a plethora of good photo locations, and has the potential to become a sudden hub of activity on any given day if for some reason an eastbound stalls on the grade east of town. In downtown you have the ability to view both the east- and westbound signals at CP Attica (MP 392.5), which is the west end of the Attica/Linden siding. These signals can be seen from Exchange Street and Favor Street respectively. For the purposes of chasing a morning eastbound, your best bet is the signals at CP Attica, just off Favor Street. As you pull into this location, you’ll also notice remnants of the former Attica Branch, now used only as a maintenance of way stub siding. The Attica Branch was once a critical connection to former Lackawanna trackage (and points north) during the Erie Lackawanna and Conrail eras, but was taken out of service in 2008 when its last customer shifted to truck transport.

As you leave Favor Street and head east on Route 238, you will notice the Southern Tier Line turns temporarily northward as it begins its ascent up the ruling grade of “Attica Hill.” The grade here is a true challenge, with the potential to bring a heavy manifest down to walking speed. Struggling notch-8 prime movers echoing off the surrounding hills in this area are truly a treat for any railfan to behold. A quick left from Route 238 onto Maplewood Road allows for a great broadside shot from the shoulder of an older barn and the rolling hills of the area. From here head north to the T intersection of Stroh Road, where a quick series of right turns gets you to Spring Road, which provides your first option for shooting Attica hill. East of the grade crossing, the elevation of the road provides a marvelous view of the train sweeping around an S curve just east of milepost 389 below…

Read the rest of this article in the January 2022 issue of Railpace Newsmagazine. Subscribe today!