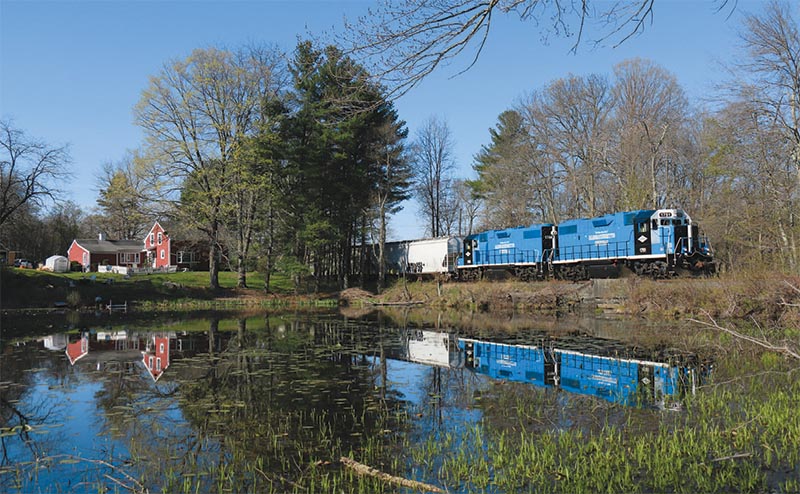 On a clear spring morning in May 2016, Massachusetts Central train PA-2 with 1751-1750 breaks the morning silence passing the Forrest Lake dam in Thorndike, Mass., milepost 6. Thankfully this day, no fog has surrounded the pond to obscure this beautiful New England scene. Steve Carlson 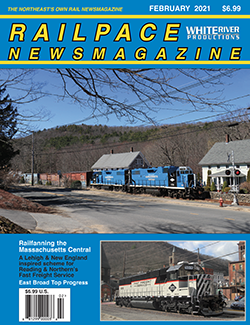 By Andrew Grahl, Steve Carlson, and Zachary Carlson/photos as noted

Looking for a railroad to visit in the Northeast that has excellent scenery, a predicable schedule and handsome locomotives in a McGinness-inspired, Boston & Maine “Blue Bird” livery? Then the Massachusetts Central Railroad Corporation also known as MassCentral, based out of Palmer, Massachusetts, is a must visit for you! Trains operate 25 miles from the railroad hub of Palmer to the northern end of the line in South Barre.

Most railfans are familiar with the town of Palmer in Hampden County, Massachusetts, because of the diamond crossing and classic Romanesque Union Station opened in 1884, designed by Henry Hobson Richardson. The station is now the Steaming Tender Restaurant, a well-known railfan hangout.

The town of Palmer was founded in 1716 and proudly mentions on its webpage that they are The Town of Seven Railroads. These railroads include the Boston & Albany Railroad, Central Vermont Railway, Springfield, Athol & Northeastern Railroad, Ware River Railroad, and the Central Massachusetts Railroad. Included in the list is the Hampden Railroad, that was built but never operated, and the Southern New England Railway, that was never completed. Visitors to Palmer today will find CSX and Amtrak action on the former Boston & Albany Railroad, which later became the New York Central; the New England Central Railroad on the former Central Vermont Railway, and the Massachusetts Central, the subject of this feature, on the former Ware River Railroad and Central Massachusetts Railroad. 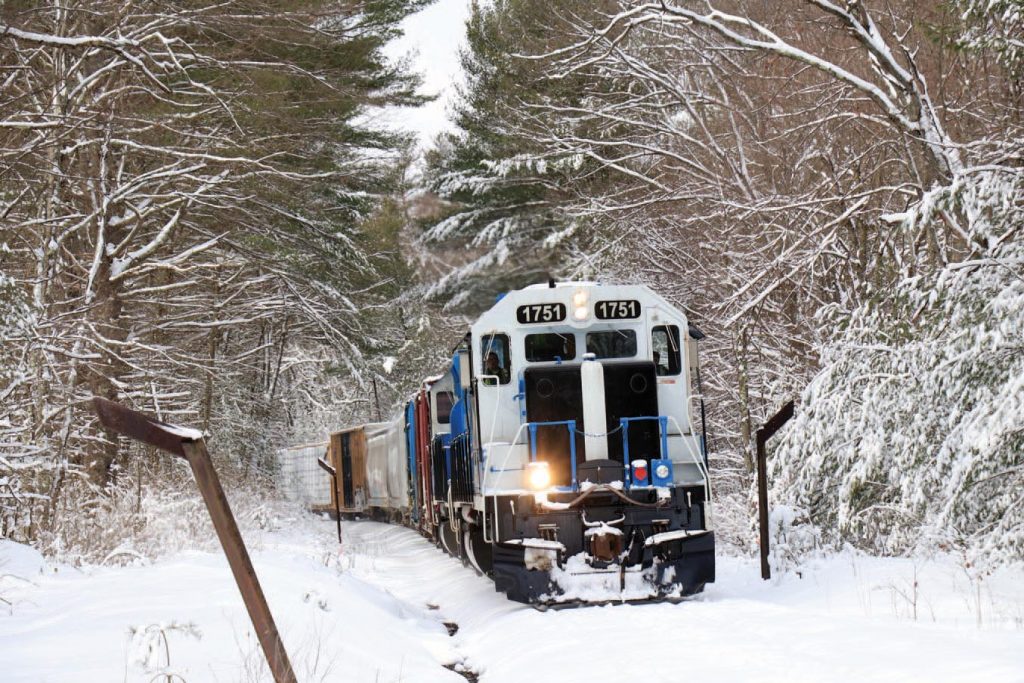 Engineer Ed Teague has both Geeps 1751-1750 on PA-2 and is charging through a late winter storm, about to cross Malboeuf’s private crossing in South Ware on March 14, 2018. Former New York Central flange posts are located up and down the line, adding a nice prop to the lineside scenery. Steve Carlson

Ware River Railroad
In 1870, the Ware River Railroad opened from Palmer north to Gilbertville, a distance of 16 miles. Shortly after opening and experiencing financial problems, the Ware River Railroad was leased to the New London Northern Railroad, part of the Central Vermont Railway. The line was bought by Chester Chapin, president of the Western Railroad Corporation, and first president of the Boston & Albany. He later sold it to his Boston & Albany for a $30,000 profit. In 1873, the line was extended north to Winchendon, more than 20 miles north of today’s northern end of the line in South Barre. 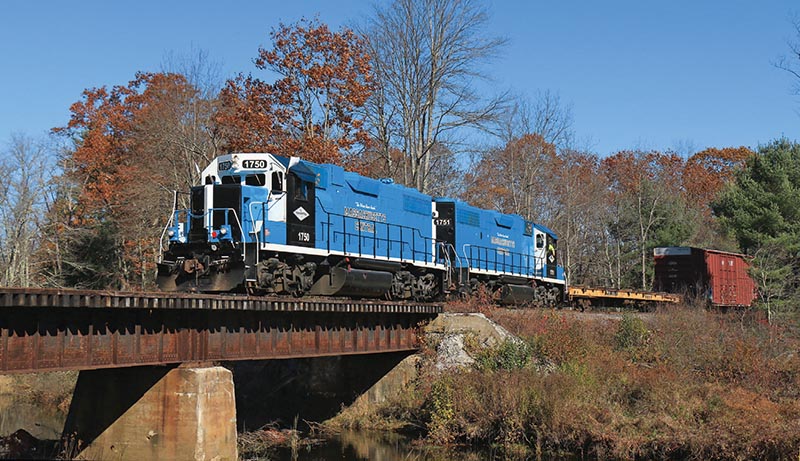 November 1, 2016, was a special day on the Mass Central. Leo Landry, a friend of many through-out the Northeast, retired with 30 years of service. Leo worked for several short lines and regionals in the New England area and is an avid modeler and historian. He has been a lifelong friend to the Carlson family from when I was a young boy. This day both GP38-2s were used and PA-2 was flying white flags to signify Leo’s last run, shown crossing the Ware River just south of Barre Plains, Mass. Steve Carlson

Under Penn Central during 1968, tracks were abandoned from South Barre north to Waterville. Freight service ceased between Gilbertville and South Barre in 1975. Under Conrail, the line continued to operate between Palmer and Ware, with the rest of the line scheduled for abandonment. During 1978, the Commonwealth of Massachusetts purchased the line and contracted with Conrail to operate the remaining in-service trackage between Palmer and Ware. That lasted for a year, as the newly-formed Massachusetts Central took over the contract from Conrail in 1979…