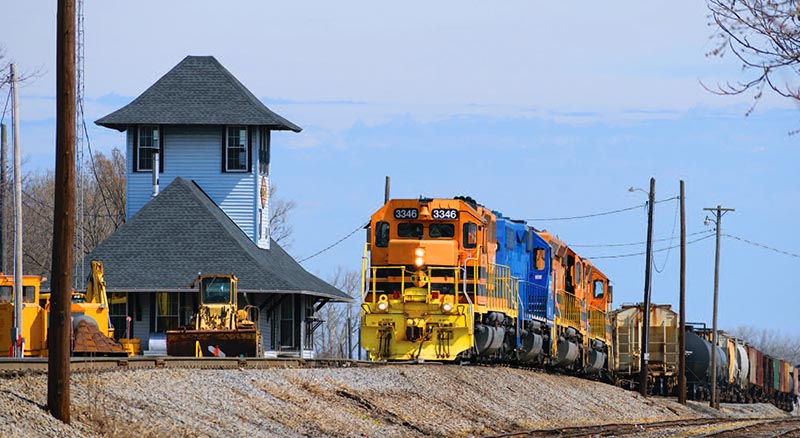 A Wellsboro & Corning SD40-3 is in the lead of the R&S GW-1 as the crew stops by the yard office in Brooks Avenue Yard in Chili, N.Y. They will build their train of empty salt hoppers for the mine in Mount Morris. In a rare occurrence, the foreground yard tracks were empty of cars, allowing for this angle from the “cell phone lot” at the Rochester International Airport, April 12, 2019. Photo by Joseph Cermak 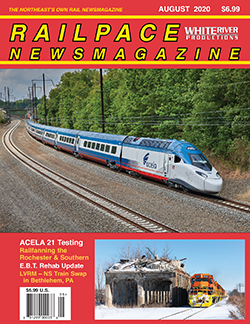 by Jackson Glozer/photos as noted

Extending from urban Rochester, New York, to the lush farm fields and rural landscapes of western New York State, the Genesee & Wyoming-owned Rochester & Southern Railroad operates the line that launched this short line conglomerate. Now owning more than 100 properties worldwide, Genesee & Wyoming Industries has greatly expanded from its roots as a small upstate New York short line to an international transportation company. The Rochester & Southern is home to a variety of first- and second-generation EMDs hauling long trains of heavy salt cars, along with carloads of mixed freight for several customers scattered along the line.

History
The Genesee & Wyoming Valley Railway was incorporated in 1891 and opened from Retsof northward to P&L Junction in 1894. The company was placed in receivership in November 1898 and sold to the Genesee & Wyoming Railroad, which was incorporated March 24, 1899. Today’s G&W empire started with this 14.5-mile long line that connected the salt mine in Retsof, N.Y., to the busy main lines of New York Central, Lehigh Valley, Erie, and Baltimore & Ohio at P&L junction in Caledonia, N.Y. 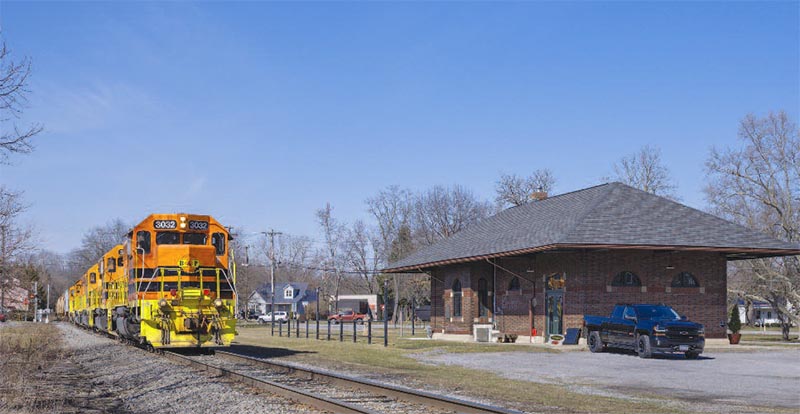 Rochester & Southern Train GW-1 is on its way south through the town of Leicester, N.Y., as it passes the restored Delaware, Lackawanna & Western depot, now home to “Gatherings at the Depot” coffee shop. Photo by Jackson Glozer

This operation continued in the same way until the 1980s when the Staggers Act allowed railroads to more easily dispose of routes that they could not operate profitably. During this time the Genesee & Wyoming started to purchase other shortlines, allowing the company to expand operations across the region. In 1982, G&W took over the former Conrail trackage (original Lackawanna main line) between Greigsville and the Dansville & Mt. Morris connection at Groveland. In 1985 G&W acquired the former B&O (Buffalo, Rochester & Pittsburgh) from Rochester south to Silver Springs to form the new Rochester & Southern. 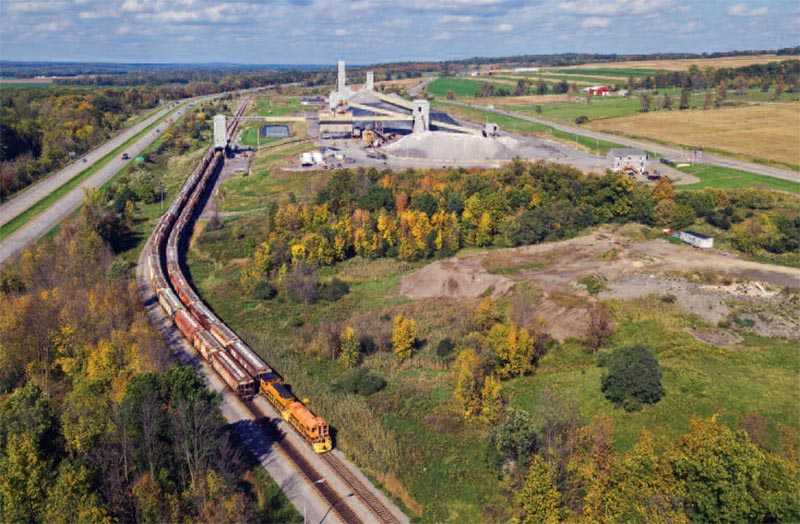 A pair of Genesee & Wyoming SW1001s pull salt hoppers through the loadout at the American Rock Salt mine in Mount Morris, N.Y. Fall color is just starting to emerge in this aerial view on this unusually warm October 9, 2018. Photo by Joseph Cermak

Operations
A typical day on the Rochester & Southern Railroad starts at their Brooks Avenue Yard located on the west side of the Rochester airport. All trains orig-inate and terminate here, making it easy to catch the action. Trains run every weekday, with an occasional weekend extra, depending on the number of cars. There are two main road trains on the R&S, one that runs to Silver Springs to interchange with Norfolk Southern, and one that runs to the American Rock Salt mine in Mount Morris, N.Y. The railroad assigns train symbols by the crew that is operating the train, but for simplicity’s sake symbol “RS-1” is the run to the NS interchange at Silver Springs, and “GW-1” is the run to the salt mine Mount Morris.

There are also local trains that do most of the switching on the R&S. “BL-1” is the train that usually switches the industries along the R&S and G&W subs. “BY-1 and 2” is the train that switches Brooks Avenue Yard itself and the industries on the Belt Line Sub. During the Spring, Summer, and Fall sea-sons, GW-1 to Mt. Morris is the daylight run, with RS-1 to Silver Springs run-ning after dark using the same power as the daytime GW-1. During the winter however, these schedules flip, with the RS-1 to “the Springs” being the day-light train, and GW-1 being relegated to a night time journey. This is due to the higher demand for salt during the winter, and the changed schedule facil-itates the loading of more trucks at the salt mine during the daytime in the winter season. 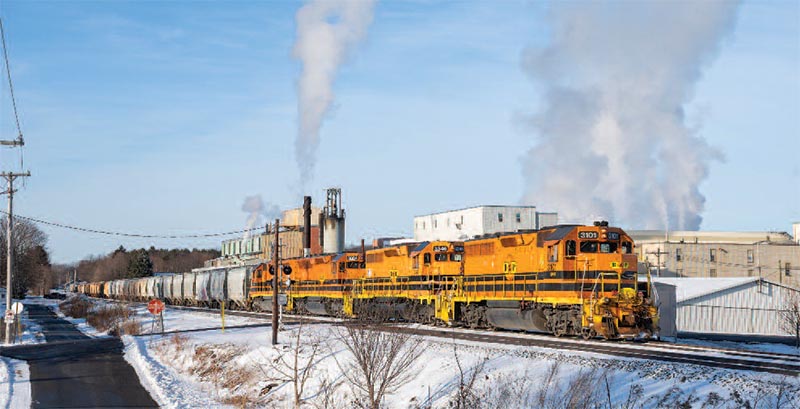 Rochester & Southern Train RS-1 has arrived in Silver Springs and is slowly pulling down the runner and soon will back the train into the Norfolk Southern interchange yard. The complex in the background is the Morton Salt plant which is served by rail. The track at left is NS’ (former Erie Railroad) Southern Tier Line. Photo by Jackson Glozer

The crew for BY-1 goes on duty around 8:00 a.m. and performs switching duties in Brooks Avenue Yard and at surrounding customers. Occasionally they will run north on the Belt Line Sub to serve American Packaging and Eastman Kodak. Just north from Brooks Avenue yard the railroad crosses above the CSX Rochester Sub on a single span truss bridge, located on West Avenue. Farther north on the line, notable locations are the Lyell Avenue grade crossing, Ferrano Street, where the railroad crosses above the former New York Central Falls Road, and the West Ridge Road crossing. At the West Ridge Road crossing the train shoves back into the Kodak Park yard to interchange traffic. Most of this area is inacessible, but viewing from the grade crossing can still provide some great images.

The crews for a GW-1/RS-1 normally go on duty in Brooks Ave yard at 11:00 a.m., assemble their train for the southbound run, and are on the mainline getting a track warrant between 11:30 a.m. and noon. Radio frequencies for the line are 160.77000 MHz for the road channel, and 161.10000 for Brooks Avenue Yard. GW-1 and RS-1 use the same trackage from Brooks Avenue Yard to P&L Junction, allowing for year-round daylight action on this section of the line…

Read the rest of this article in the August 2020 issue of Railpace Newsmagazine!

MTA Metro-North Railroad and City Experiences announced global tours and experiences provider, Walks, as the new operator of the Official Grand Central Terminal Tour. The terminal tours return for the first time since taking a hiatus during the pandemic. The VIP tours provide guests with official tour of the historic landmark, offering a unique perspective of one of the most recognizable train terminals in the world.