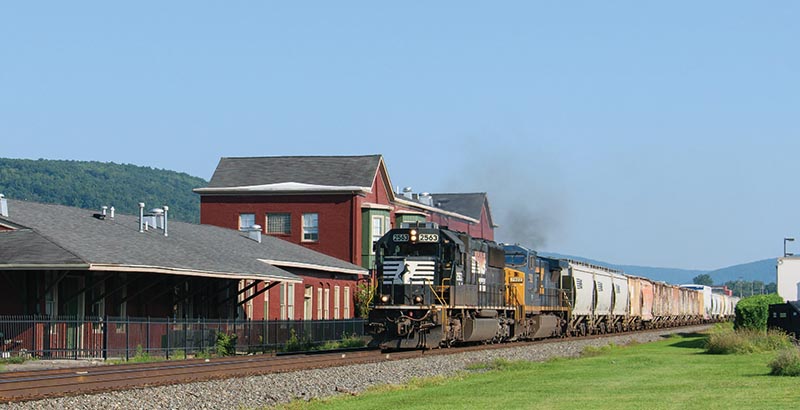 Spartan cab SD70 2563 and a former CSX Dash-8 (now part of the GE Lease Fleet) lead NS manifest freight 309 as it passes the former Erie Railroad Hornell depot on the Southern Tier Line, making an afternoon run from Gang Mills to Buffalo on August 24, 2018. The Erie Lackawanna Hornell Dispatcher once occupied the office on the second story of the depot. This afternoon view is from the grassy field behind the Walgreens drug store, on the west side of the track. In the distance, above the train consist, is the corner of the roof of the former Erie Railroad (later, EL) Hornell Shop, now part of the Alstom facility. —Joseph Cermak 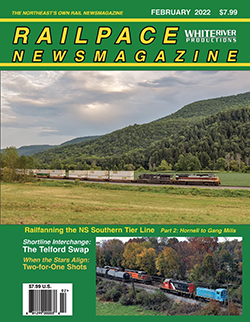 By Paul Stamp/photos as noted

We resume exploration of Norfolk Southern’s scenic Southern Tier Line this month at Hornell, N.Y., at one time a major point on the Erie and later, Erie Lackawanna. It was home to Erie and EL’s main diesel shops; today that facility is occupied by Alstom, manufacturers and rebuilders of transit and commuter rail coaches and locomotives, and constructors of Amtrak’s new Acela-II trainsets. Hornell offers plenty of amenities and restaurants while awaiting a morning eastbound.

There are usually five regularly scheduled trains a day (22K, 23K, 36T, 309 and 310) and they have a chance of being partially or completely daylight runs on Tier eastward to Gang Mills, the scope of this feature. In addition, unit frac sand Train 68N commonly utilizes Canadian National power and with the global shortage of natural gas, it has been running with more regularity. 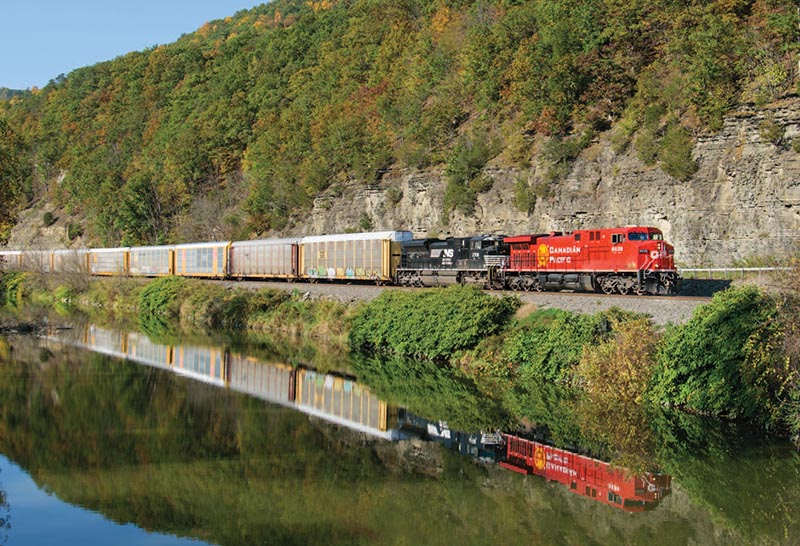 Of the five scheduled trains, NS 310 and 36T are by far the best bet for running in good light eastward in the morning. When running during periods of high volume, 36T originates in Buffalo and normally follows a few hours after train 310.

Chasing Through the Canisteo River Gorge
The section of the Southern Tier Line east of Hornell to Gang Mills is perhaps the most scenic of the entire route, and is closely paralelled by paved highways. That’s the good news. However, chasing can be a challenge due to 50 mph track speed through most of this segment, with some 40 mph restrictions. Therefore, it is best to plan a visit to truly explore the line and familiarize your-self with points of access, and acknowledge that many of the shots depicted in this feature are “set up” shots requiring advance arrival and good logistics. Another thing to consider is that the chase route (primarily county Route 119) is generally on the north side of the track, requiring the entire train to pass by before resuming pursuit, and which may consume many miles to get ahead. Be sure to start with a full tank of gas and on a full stomach, there will be no time for pit stops during the spirited chase. The best way out of Hornell headed east is via county Route 29. Route 36 also can be used, but is less direct, and requires crossing the track at grade in Canisteo. 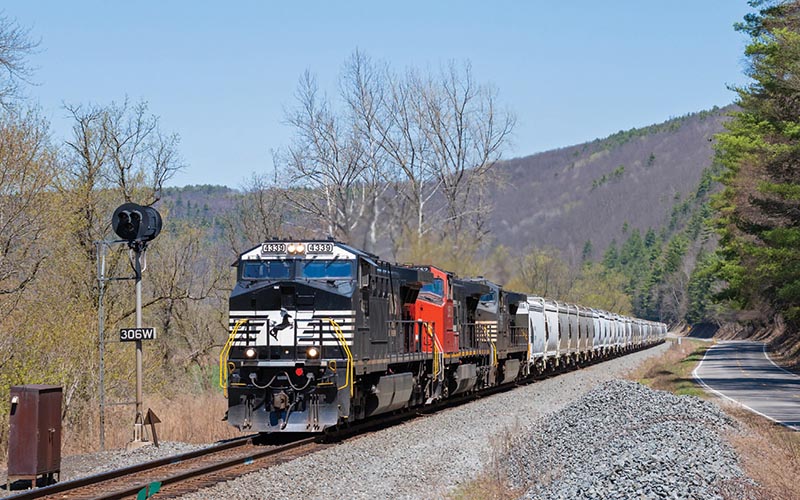 Canisteo
Route 29 becomes Route 128 on the outskirts of Canisteo, the first hamlet east of Hornell, then Route 128 suddenly morphs into Route 119 at the junction of Cansiteo River Road. Continue straight onto Route 119 and remain on Route 119 all the way through the Canisteo Gorge to Addision, where at the T intersection you continue east on NY Route 417.

While there are dozens of opportunities in the Canisteo Gorge to shoot from the side of highway, the first “signature shot” is the rock face outcrop at Browns Crossing, about three miles east of Adrian (photos at left). The best shot is obtained from walking onto the McChesney Road bridge over the Canisteo River. Railfans know this place as “Brown’s Crossing”, named after the farmer who originally owned the farm. It is also nicknamed Rattlesnake Curve. 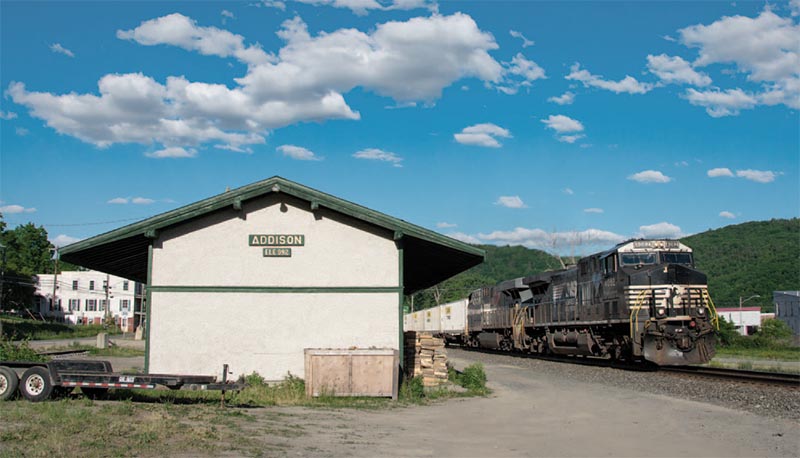 With picturesque skies above, intermodal NS 23K rolls west past the Erie Railroad depot in Addison, N.Y., and prepares to enter the Canisteo River Valley portion of the Southern Tier Line on the evening of June 14, 2020. The depot now serves as a garage for the newest owner, who has installed two roll-up doors on the other side of the building. —Paul Stamp

A controlled siding extends from Brown’s Crossing (CP-Adrian, MP 318.7) for two and a half miles to CP-CAM (MP 316.2). CP-CAM is located right at the grade crossing of Canisteo River Road/Route 119; photos top of opposite page…

Read the rest of this article in the February 2022 issue of Railpace Newsmagazine. Subscribe Today!

Patriot Rail Company LLC today announced it has entered into a definitive agreement to acquire Delta Southern Railroad, Inc. (DSRR), a short line railroad company operating two line segments in Louisiana. The financial terms of the transaction were not disclosed.