R. J. Corman Railroad Company has announced the purchase of two railroad branches from Norfolk Southern Corporation and the creation of the Knoxville and Cumberland Gap Railroad, LLC (KXCG).

The newly established KXCG is comprised of two branches. First, a 59-mile branch running between Clinton, TN, and Clairfield, TN. Secondly, a branch of 72 miles operates between Beverly, TN, crossing the iconic Cumberland Gap and connecting to Middlesboro, KY. The branches, previously owned by Norfolk Southern, were historically part of the Southern Railway.

The Knoxville and Cumberland Gap Railroad will have rights between the two branches and interchange cars in Norfolk Southern’s Sevier Yard.

This acquisition will add over 130 miles to the more than 1,200 operated by the R. J. Corman Railroad Company, LLC.

The closing is subject to customary regulatory approvals, and R. J. Corman is expected to take over operations in February 2022. 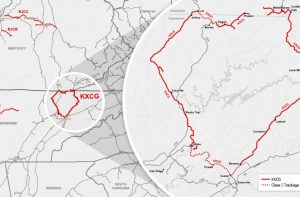 The Virginia Museum of Transportation, Inc. is proud to announce a partnership with the Railroad Museum of Pennsylvania to exhibit the Norfolk & Western class J No. 611 for a limited time during the winter months of early 2023.