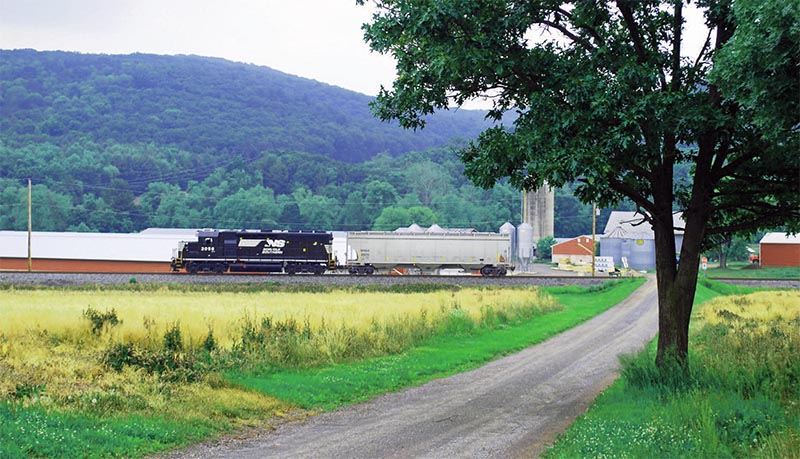 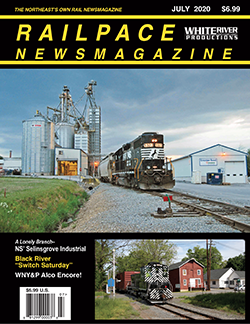 In this era of double-stack container trains, bathtub gondola unit trains, dispatching from half a continent away, and PTC and ATCS, the ancient survivor of the old days on the Class One railroad in the U.S. is no longer the caboose or the GP9, but rather the branch line local itself, the basis of so many model railroads. If a small branch off of a main line survives today, it typically is either operated by a short line or regional railroad, or it has a major customer– coal mines, power plants, oil refineries, or the like. And many of those are in jeopardy in 2020 as the “war on coal” continues, driven by low natural gas prices.

In central Pennsylvania, such branch lines have been disappearing for decades, absorbed by short lines such as the North Shore or East Penn, or regionals like the Reading & Northern or R.J. Corman. Yet, Norfolk Southern for the moment retains operation of one such classic branch, the Selinsgrove Industrial into Snyder County. And now even its survival as a Class One property is in question. 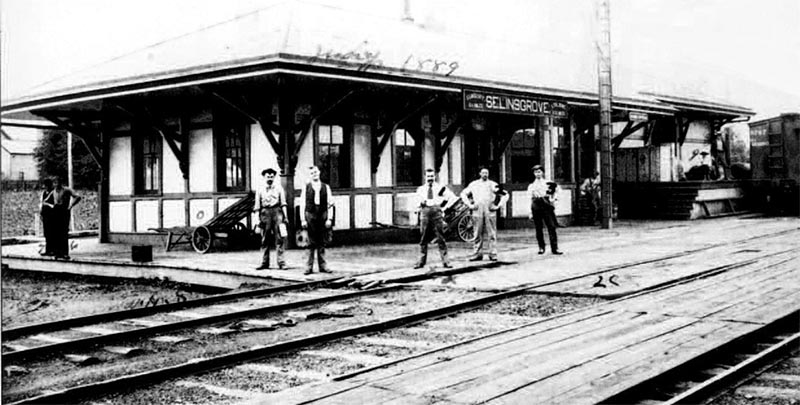 The combination station at Selinsgrove, Pa., built in 1881, is seen along with posing employees in 1889. The freight room was later doubled in size. Collection of Alexander D. Mitchell IV

History
The origins of the Selinsgrove (pronounced SEAL-ins-grove) Industrial, like many lines throughout the nation, trace back to the post-Civil War railroading boom. Local business leaders promoted and planned a line east-ward from Lewistown (a junction with the original Pennsylvania Railroad Main Line, later the Middle Division) through the Middle Creek Valley to the Susquehanna River at Selinsgrove, incorporating as the Middle Creek Railroad in March 1865. Only minor con-struction ensued over the next five years. The company was reincorporated as the Sunbury & Lewistown Railroad in 1870, opened from Lewistown through McClure, Middleburg, and Selinsgrove to a junction with the former Northern Central at Selinsgrove Junction, 43.5 miles, on December 1, 1871.

The rail line, like many such branches, was immediately leased by the PRR, which had purchased a half-interest in the line just four days before its opening. Traffic failed to meet expectations, in part because of the Panic of 1873 and ensuing depression, and the line was foreclosed upon in 1874. It was reincorporated again that year and immediately leased again by PRR interests, reopening July 24. In October 1896, the Mifflin & Centre County Railroad, which had earlier built from Lewistown Junction to Reedsville and Milroy, and shared trackage with the S&L through Lewistown streets, was merged into the S&L by the PRR. The line would subsequently be incorpo-rated into the Schuylkill & Juniata in 1900, and finally into the PRR in 1902.

Under Pennsylvania Railroad control, the line through Selinsgrove served as an important shortcut for moving anthracite from PRR-controlled coal fields in the Hazleton and Wilkes-Barre areas westward to Pittsburgh, avoiding Harrisburg, and for moving perishables to New York markets via interchange with the Lehigh Valley Railroad at Mt. Carmel, avoiding both Harrisburg and Philadelphia. Until a great deal of traffic was diverted to the Bald Eagle line between Williamsport and Tyrone in September 1908 for its lower grade profiles, the Selinsgrove line saw as many as seventy trains and a thousand carloads a day, with freights largely handled by class R 2-8-0s (later H3, identical to survivor 1187 at the Railroad Museum of PA) and H6 Consolidations. 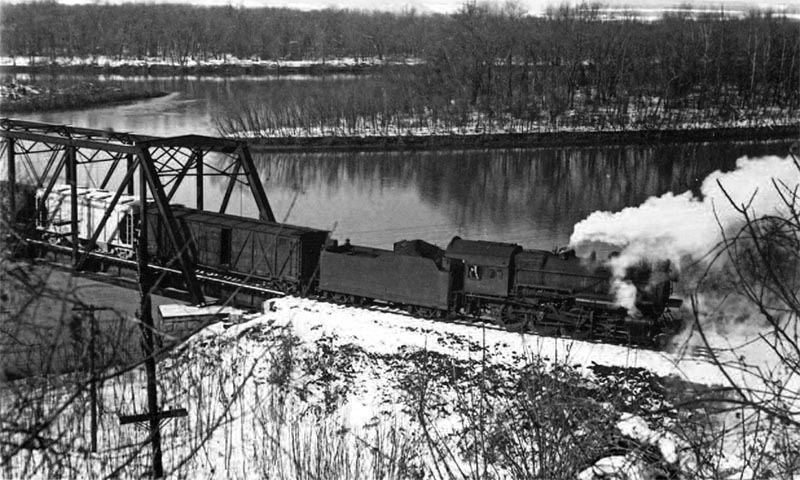 Before the flood of coal to the power plant and while the locals ran the full length of the line, PRR H9s 2887 crawls off the shorter of two bridges across the river approaching Selinsgrove Junction in the winter of 1948. Photo by Clarence R. Weaver, Collection of Alexander D. Mitchell IV

During the First World War, over forty trains a day, freight and passenger, traversed the line. The line’s proximity to Altoona allowed it to be used as a test-bed for various experimental programs, including grade crossing signs, passenger car lighting systems, and a prototype for what would become the PRR’s automatic train stop and cab signal display system, tested between 1923 and 1926. (See Railroad Magazine, August 1956, for more details on this pioneering project, a distant ancestor to modern PTC). The line was also used for occasional, and sometimes frequent, detours around wrecks on the Middle Division or on the nearby Bald Eagle line between Tyrone and Williamsport.

In the early 20th Century, the PRR began purchasing large tracts of land in Shamokin Dam, Pa., north of Selinsgrove, with the intention of opening a car shop or yard to replace overcrowded and aging facilities elsewhere. New car shops would eventually be built in Renovo and Hollidaysburg instead, and a huge yard at Northumberland was built in 1911 to replace the small yards on the south and north ends of Sunbury. The PRR would continue to hold the land in Shamokin Dam until it was sold to the Pennsylvania Power & Light Company in August 1945 for a new coal-burning power plant. To serve the power plant, the PRR re-installed a wye between the Penns Creek bridge and Susquehanna River bridge on the “Isle of Que” peninsula– built in 1906 to turn detouring trains and dismantled in a 1942 wartime scrap drive– and laid two miles of line to the plant. The foundation for the S&L’s original enginehouse survives in the deep vegetation inside the wye.

Passenger service, which typically amounted to two trains each way a day except on Sundays, ceased in January 1932, though chartered trains (such as trainloads to state and national political conventions and major civic events) and detoured trains still traversed the line occasionally. The last passenger movements on the line were a pair of excursions utilizing back-to-back EMD F units from Selinsgrove to McClure and return to mark Snyder County’s centennial on August 14, 1955, a day with later heavy rainfall and flooding from Tropical Storm Connie.

In 1953, the PRR began running out-and-back locals out of Northumberland and Lewistown rather than a through train over the line daily. The daily local to the eastern half of the line was designated S-71 by the PRR timetables, and typically included delivery of coal to the PP&L power plant. In September 1957, right at the end of PRR steam, the PRR petitioned the ICC to abandon ten miles of track between McClure, the westernmost station in Snyder County, and Maitland, five miles east of Lewistown; approval was granted in December, with removal occurring in late 1958 and early 1959. This abandonment severed the former through line into two branches. An additional six miles from McClure to Beaver Springs was aban-doned in 1963, and six miles from Beaver Springs to Paxtonville was abandoned in August 1965. The now-twelve-mile long line from Selinsgrove Junction to Paxtonville survived into the Penn Central era in 1968, with typical deferred maintenance leading to increasing (albeit mostly minor) derailments. One major shipper on the line, Paxtonville Brick Co., burned in May 1963 and never rebuilt, leaving only a feed mill at the western end. 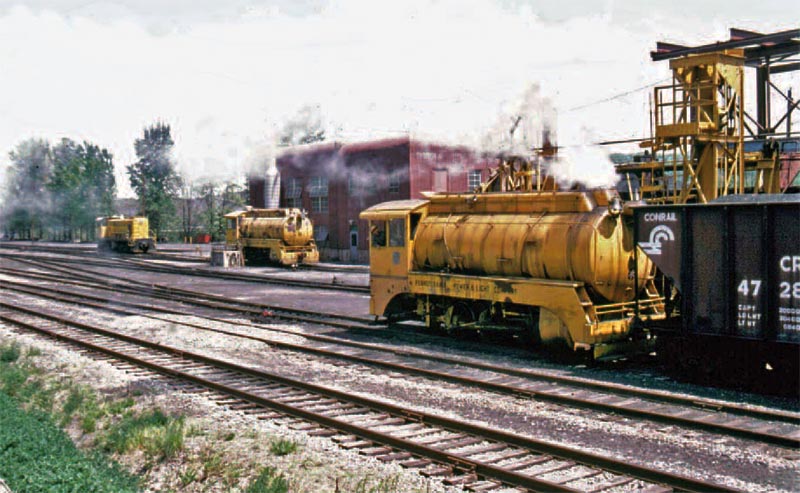 Former West Pittston & Exeter S3 6, built 10-1950, is seen in the distance as Pennsylvania Power & Light 6 with cut-down cab, and PP&L fireless 1 and 2, with 2 at the charging port beside the Shamokin Dam power plant during the Conrail era. No. 1 was scrapped near Lewisburg in 2014 after years of drifting around the area; 2 went to Hamburg, Pa., in private ownership. Alexander D. Mitchell IV

In the mid-1950s, the “S&L” would be the regular haunt of some of PRR’s last steam locomotives, as H-class 2-8-0s operating out of Northumberland yard and roundhouse would power the local to and from McClure and to the power plant. Railfan photographers who came to the area, however, tended to focus instead on mainline action (which included leased Reading T-1s on the PRR) and local S-390, the Mt. Carmel Ore Train, a behemoth running from Northumberland to Mt. Carmel with doubleheaded I1s 2-10-0s front and rear. Steam use ceased at Northumberland, on the S&L, and all over the PRR in late November 1957, and diesels, largely Alco RS3s and RS11s and EMD F7s and GP9s, were then assigned instead to S-71 (Northumberland had plenty of Baldwin switchers in the last days of the PRR, but none that had m.u. capability).

One exception among the photographers who flocked to the main line was Sunbury teacher and railfan Clarence R. Weaver, who in 1954 and 1955 undertook numerous trips chasing the S&L local with a 16mm movie camera, tripod, Kodachrome film, and tape recorder. The resulting film clips were spliced together to depict a single out-and- back trip on the branch, with different trains shown at each location from start to finish, paired with sound tape-recorded on the runs cued to approximate what was seen on screen, and a final flourish of clips of the Snyder County Centennial excursions. The film, a cult classic among local historians and PRR fans for years afterwards when Weaver would occasionally show them for the public, were finally released on video by Penn Valley Pictures, and remain to this day one of the best amateur documentaries of the steam era ever filmed…

Read the rest of this story in the July 2020 issue of Railpace Newsmagazine!