On January 1, 2023 marked the 40th anniversary of NJ TRANSIT assuming control and management of the operations of New Jersey’s commuter rail network, previously operated by Conrail under contract to NJ TRANSIT and the State of New Jersey.

Shortly after midnight on January 1, 1983, the first “NJ TRANSIT” trains departed Hoboken and Penn Station New York with crews who were now officially NJ TRANSIT employees. Over the past 40 years, NJ TRANSIT has steadily improved New Jersey’s rail network by investing in modernized equipment, rebuilding the infrastructure and right-of-way, increasing service to Midtown Manhattan, introducing one-seat rides to Penn Station New York on three rail lines, increasing overall capacity, extending electrification on two busy rail corridors, and much more. We look forward to achieving another 40 years of progress as we continue to enhance the travel experience for all NJ TRANSIT rail customers.

“Congratulations to the men and women of Rail Operations for a job well done.” said New Jersey Department of Transportation Commissioner and NJ TRANSIT Board Chair Diane Gutierrez-Scaccetti.  “I am proud of NJ TRANSIT’s commitment over the last four decades in providing safe and reliable rail travel for millions of customers all over the state. And we continue to use and invest in the latest technologies and advances to enhance service and safety.”

“Our congratulations and thanks go out to the entire NJ TRANSIT Rail Operations team, past and present, on the occasion of its 40th anniversary,” said NJ TRANSIT President & CEO Kevin S. Corbett. “With a proud legacy behind us, an extraordinary team now in place, major rail infrastructure projects like the Portal North Bridge Replacement Project currently underway, and 138 new multi-level rail cars beginning to arrive in 2024, the future looks very bright for this essential division of NJ TRANSIT – and more importantly, for the millions of customers who depend on it every year.”

In recognition of this anniversary, NJ TRANSIT has painted four locomotives in “Heritage” paint schemes to recognize the predecessor railroads and employees that make up our system.  In the photo,  ALP46A 4636 wears a Pennsylvania Railroad-inspired scheme, while GP40PH-2 4109 appears reminiscent of its as-delivered Central Railroad of New Jersey paint scheme.  Cheers to 40 years! 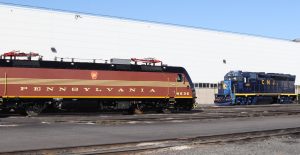