The Metropolitan Transportation Authority (MTA) Board’s New York City Transit Committee today approved an order for 640 more R211 subway cars, authorizing the full MTA Board to consider the order on Wednesday. The subway cars will be manufactured by Kawasaki Rail Car, Inc., wholly-owned U.S. subsidiary of Kawasaki Rail Car Manufacturing Co., Ltd., based in Yonkers, New York, at its facilities in Lincoln, Nebraska and Yonkers, New York. The state-of-the-art Lincoln facility will manufacture the car body structure and install interior equipment, while final assembly and function testing will be performed at the Lincoln and Yonkers facilities.

Qualification testing on the R211s already delivered is underway with passenger service expected by the spring.

The option, an addition to the base order of 535 cars awarded in 2018, would bring the total number of R211 cars ordered to 1,175, including 75 Staten Island rail cars and 20 cars that feature open gangways.

These R211 cars, initially planned for the A and C lines and the Staten Island Railway, are a critical part of the MTA’s ongoing modernization efforts. They feature 58-inch-wide door openings that are eight inches wider than standard door openings on existing cars. The wider doorways are designed to speed up boarding and reduce the amount of time trains sit in stations.

The cars also include security cameras, digital displays that will provide information about service and stations, and brighter lighting and signage, slicker bonnet design, among other features. 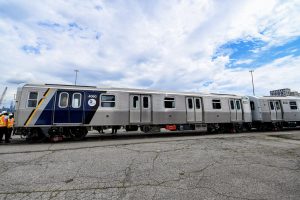