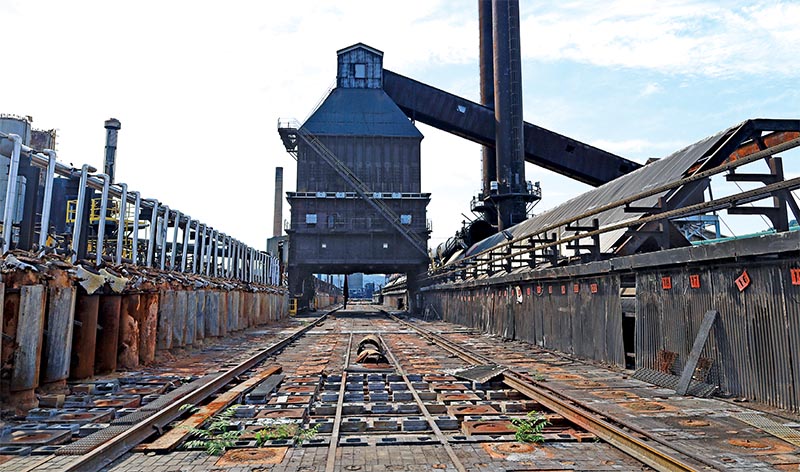 Original Battery “A” had 47 coke ovens which started production around 1919. At the top is where crushed coal is blended prior to being charged in a coke oven. An electrically-powered “Larry car” operated along the broad gauge track and received 250VDC power from two “hot rails” to the right. The Larry car charged the individual oven with the blended coal. The coal tower in the back-ground is where the crushed coal was delivered to the hoppers of the Larry car. This battery was one of four operated by the coke plant. 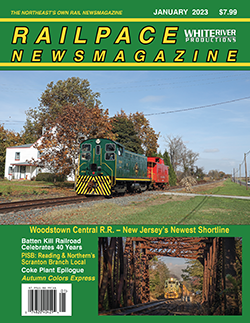 by Raymond Mercado/photos by the author

Cleveland-Cliffs closed its historic Mountain State Carbon plant along the Ohio River in Follansbee, W.Va., during spring 2022. Constructed in 1917 by Wheeling Steel Corporation to supply coke for its operations, the facility also supplied the former Jefferson Iron Works, located west across the Ohio River in Steubenville, Ohio, and accessed by Wheeling Steel’s railway bridge, and the La Belle Iron Works in Wheeling. The facility changed hands several times over the years, subsequently operated by Wheeling Steel, Wheeling-Pittsburgh Steel, Severstal, RG Steel, and Mountain State Carbon. The coking facility involved four coke oven batteries for coke production, which produced metallurgical-grade coke and coke gas byproducts (light oil, ammonium sulfate, fuel gas, coal tar, sulfuric acid) from coal, for use at various other steel facilities and commercial sales. The maximum capacity of the coke plant was 174.9 tons per hour, 1,535,000 tons per year, of coke output, derived from 249.8 tons per hour and 2,190,000 tons per year of coal input.

After the plant ceased production in late March 2022, Cleveland-Cliffs began offering the 280 union employees jobs at the nearby Cliffs Weirton Tin Works and other facilities from April through June 2022. According to Cliffs, the plant closed due to old age and the reduced need for coke. 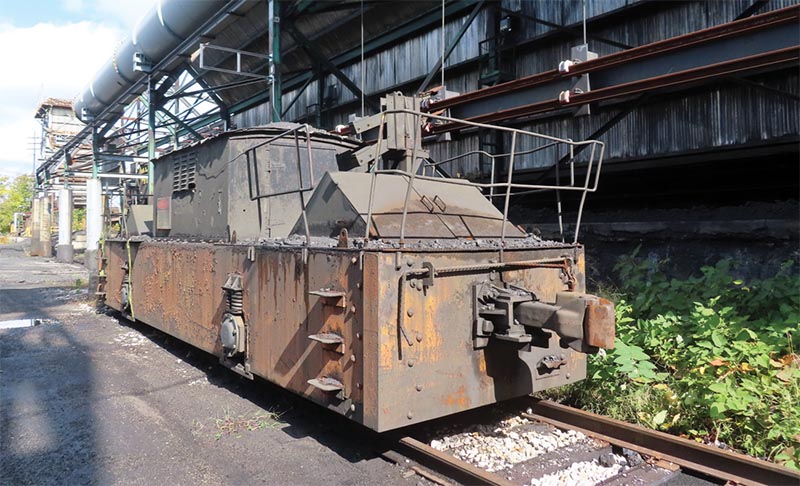 ABOVE: An Atlas Car & Equipment-built (s/n 2729 Job: F7465, blt 1947) remote controlled “Mule” locomotive was used to shuttle hoppers filled with fresh coke to a storage area. The 70-ton unit was electrically propelled at 250VDC with hot rails (seen behind the unit) supplying power. The mule was controlled by an operator at the coke screening station.

At Cliffs’ remaining steel-making facilities in Indiana Harbor and Cleveland, some coke is being replaced by HBI (Hot Briquetted Iron), which is a low-carbon iron feedstock used in blast furnaces, BOFs (Basic Oxygen Furnaces) and EAFs (Electric Arc Furnaces), now being produced at Cliff’s natural-gas-based plant in Toledo, Ohio. More scrap is also charged into the process, reducing the need for coke, helping to meet carbon-reduction goals, and avoiding large investments in upgrades.

To briefly explain the coke-making process that took place at the 105-year-old Follansbee plant, there were numerous rail-operated machines used to process coke in the four coke battery ovens…

Read the rest of this story in the January 2023 issue of Railpace Newsmagazine. Subscribe Today!