The ribbon-cutting event showcased the completion and opening of the project ahead of schedule. By accomplishing seven weeks of 24/7 accelerated work on the B Branch, the GLT team was able to complete both stations months in advance as well as upgrade two intersections and renew 5,000 feet of track on the B Branch. 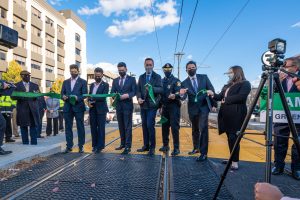 The newly opened stations combined the old St. Paul Street and BU West Stations into one station – Amory Street Station – and the old Babcock Street and Pleasant Street Stations into one station – also called Babcock Street Station. With the completion of this project, four inaccessible stops have been consolidated into two accessible stations that are safer for riders of all abilities. This project also furthers the enhancement and efficiency of the Commonwealth Avenue corridor with less stops.

The new stations include longer, low-level platforms in both directions. These new platforms are 225 feet long, which enables them to fit a two-car train of the newly designed Type 10 “supercars” currently in procurement. The MBTA expects to award a Notice to Proceed for construction of the new Type 10 cars next year with the first pilot car anticipated to be in Boston by 2026. The new stations also feature 150-foot-long canopies at each new platform, accessible walkways, new communications and security systems, safety barriers to protect riders on the platforms from traffic, lighting, signage, new benches, and additional station elements.