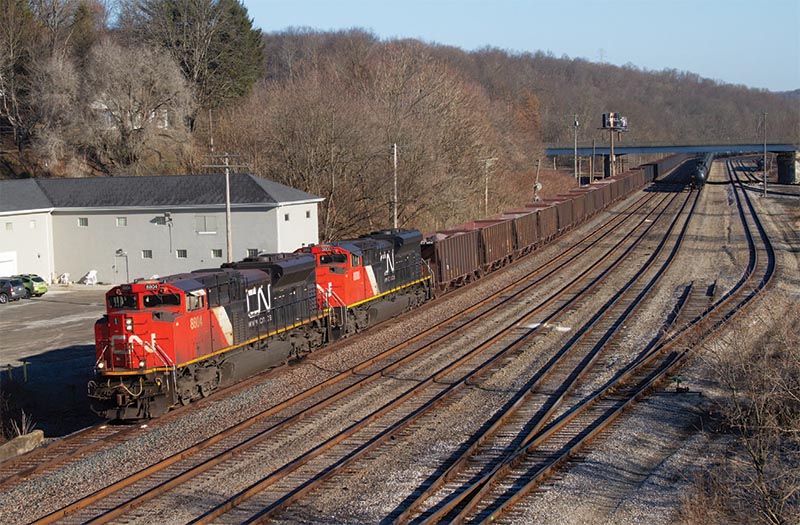 For a few years, Canadian National operated the daily loaded ore train south of Greenville during the afternoon hours, which put the train through Butler in the late afternoon or evening hours. In November 2020, CN switched the time of the ore train to the morning hours, with the train departing Greenville around 6:00 a.m. This puts the ore train through Butler between 8:00–9:00 a.m. The south-bound ore train passes under the Route 422 bridge in Butler at 8:37 a.m. as it approaches the Route 68 overpass with CN SD70M-2s 8804 and 8800 on the point, March 3, 2021. The Buffalo & Pittsburgh Butler engine facility is just out of view to the right. Note the searchlight signal above the 5th car in the train. This signal is dark until the CN dispatcher lines the train through Butler, at which time the signal shows green.

By David Baer/photos by the author

Butler, Pennsylvania, located 45 minutes north of Pittsburgh, is a two-railroad town which can be surprisingly busy. Canadian National operates the former Bessemer & Lake Erie Railroad through town, while the Buffalo & Pittsburgh operates the former Baltimore & Ohio Railroad’s BR&P line. With mostly reliable schedules, it is quite possible to catch a pair of CN trains passing through Butler during daylight hours along with two pairs of B&P trains. Let’s review a visit on March 3, 2021. 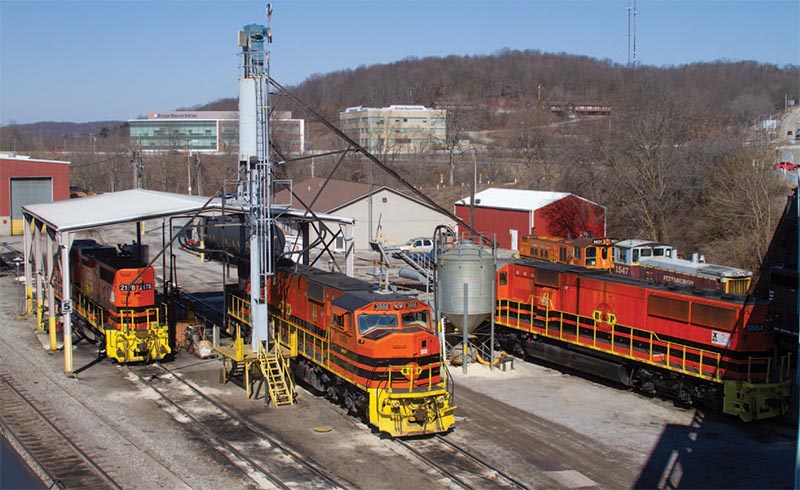 Twice a week, CN will run a “miscellanies” train south from Greenville, Pa., which works in AK Steel in Butler, along with any local work on the line. Depending on customer needs, the “misc” train might return north to Greenville after working in AK Steel, or it could continue south toward North Bessemer. The “misc” train normally leaves Greenville between 8:00–10:00 a.m. and arrives in Butler about two hours later.

The B&P in Butler hosts Butler yard job, BT-1, which works around Butler during the morning hours. Butler local BT-3 comes on duty at 9:00 a.m. and operates from Butler northward onto the Northern Sub. Branch to Karns City and return, working weekdays only. After coming on duty, BT-3 will head east toward East Butler to make up its train, then depart town between 10:00 a.m. and noon. After working the chemical plants around Karns City, BT-3 will return to Butler between 3:00 and 6:00 p.m…

Read the rest of this article in the June 2021 issue of Railpace Newsmagazine. Subscribe Today!