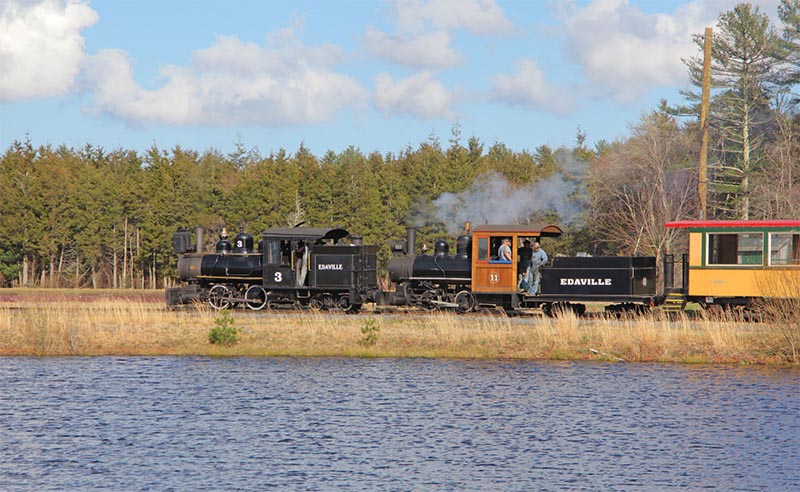 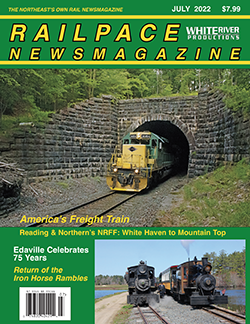 By Savery Moore/photos as noted

The Edaville Railroad celebrated its 75th anniversary over the weekend of April 23–24, 2022, on home rails in South Carver, Mass. The “Golden Spike” on Edaville’s original 5-½ mile long loop of track was driven on April 7, 1947.

Each day’s schedule included trips around the current two-mile loop behind engine 11, while No. 3 powered two trips on the old main line to end-of-track. The highlight of the event was a late afternoon double-header on Saturday, April 23, when No. 3 tied on to No. 11’s train and also proceeded to the end of track. Each trip on both days had photo run-bys, which were quite popular with the passengers on board.

All three current Maine 2-foot gauge operations – the Sandy River Railroad in Phillips; Wiscasset, Waterville & Farmington in Alna; and Maine Narrow Gauge in Portland – set up information booths around the property, and also supplied crew members for the trains. Several model railroad clubs had operating modular layouts, the Waushakum Live Steamers had a short section of track, and a live steam locomotive, and there was also a robust display of historic cars, tractors, and steam-powered machinery.

The event exuded the atmosphere of a reunion, as past employees and owners of Edaville attended as special guests of Maine Locomotive & Machine Works. Many of these Edaville alumni had not seen each other since the 1997 Cranberry Festival, which was also the last time No. 3 had traversed these rails that were its home for 45 years. One of Edaville’s former owners even took a turn at the throttle of No. 3, at age 79!

While Edaville’s future is uncertain at this time (the current owner has announced that the park is for sale), the smiles on all of the faces showed there is still a deep connection to the railroad.  Thanks are due for the hard work of Maine Locomotive & Machine Works personnel and the countless volunteers who gave their time and effort. For one great weekend, the past glory of two-footers in Massachusetts returned.

This article appeared in the July 2022 issue of Railpace Newsmagazine. Subscribe Today!