The Cherokee measures 590 feet in length and is designed to carry up to 135 railcars, a 17% capacity increase per sailing compared to CGR’s previous rail ferries.

CGR also took delivery of an identical second new rail ferry, the Mayan, on September 22, 2021, which is expected to enter into service in December and replace CGR’s existing vessel, the BANDA SEA. Until then, the BANDA SEA will continue to operate alongside the Cherokee to provide steady service to customers. 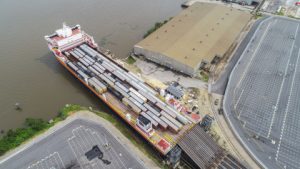