Canadian Pacific Railway Limited(“CP”) and Kansas City Southern  (“KCS”) today announced they have entered into a merger agreement, under which CP has agreed to acquire KCS in a stock and cash transaction representing an enterprise value of approximately USD$29 billion1, which includes the assumption of $3.8 billion of outstanding KCS debt. The transaction, which has the unanimous support of both boards of directors, values KCS at $275 per share, representing a 23% premium2, based on the CP and KCS closing prices on March 19, 2021 (and $270 per share, representing a 26% premium3, based on the respective CP and KCS 30-day volume weighted average prices (“VWAP”)).
Following the closing into a voting trust, common shareholders of KCS will receive 0.489 of a CP share and $90 in cash for each KCS common share held.
Following final approval from the Surface Transportation Board (“STB”), the transaction will combine the two railroads to create the first rail network connecting the U.S., Mexico, and Canada. Joining seamlessly in Kansas City, Mo., in America’s heartland, CP and KCS together will connect customers via single-network transportation offerings between points on CP’s system throughout Canada, the U.S. Midwest, and the U.S. Northeast and points on KCS’ system throughout Mexico and the South Central U.S.
The combined network’s new single-line offerings will deliver dramatically expanded market reach for customers served by CP and KCS, provide new competitive transportation service options, and support North American economic growth. The transaction is also expected to create jobs across the combined network. Additionally, efficiency and service improvements are expected to achieve meaningful environmental benefits. 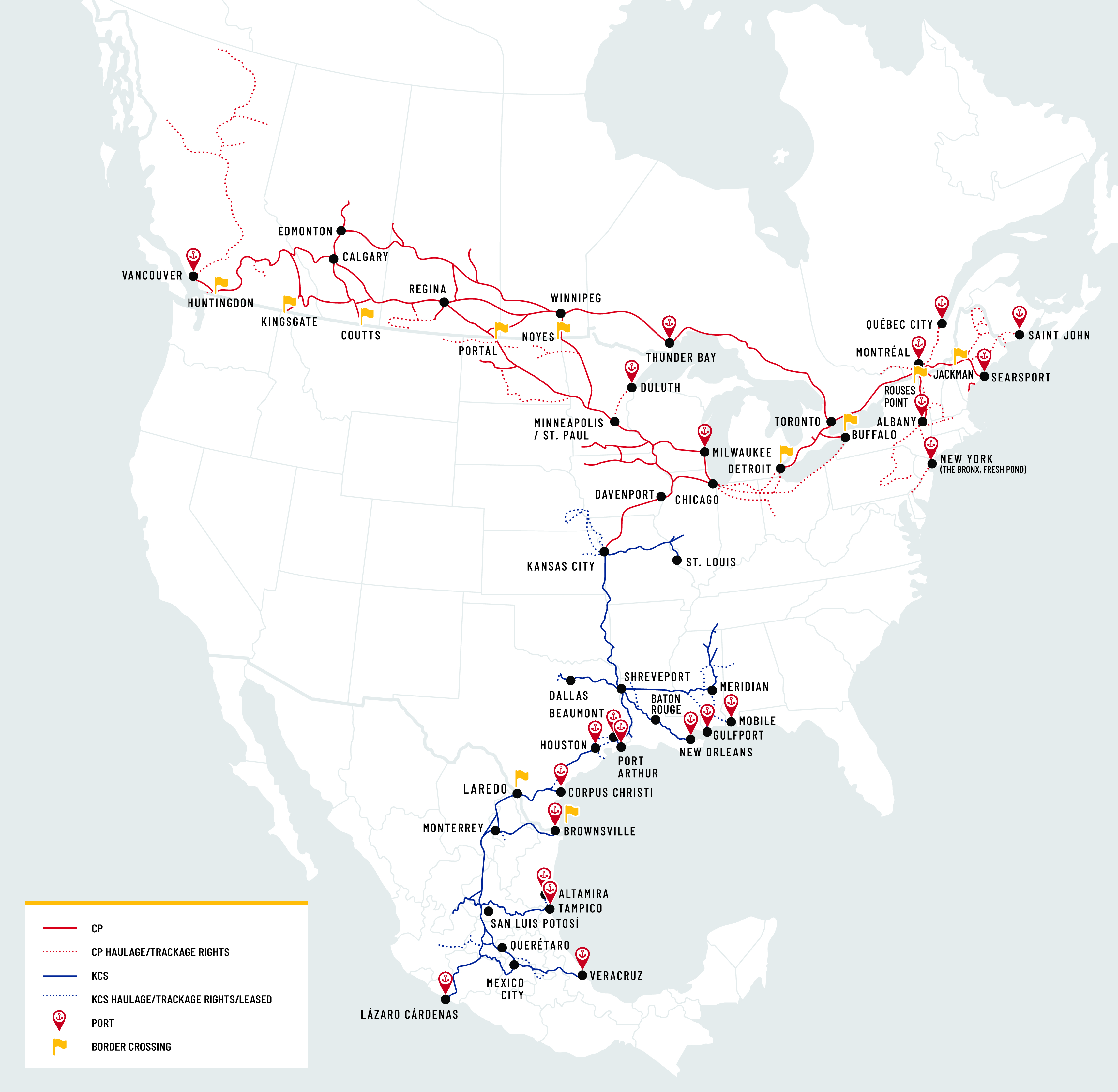 While remaining the smallest of six U.S. Class 1 railroads by revenue, the combined company will be a much larger and more competitive network, operating approximately 20,000 miles of rail, employing close to 20,000 people and generating total revenues of approximately $8.7 billion based on 2020 actual revenues.
The combination will provide an enhanced competitive alternative to existing rail service providers and is expected to result in improved service to customers of all sizes. Grain, automotive, auto-parts, energy, intermodal, and other shippers, will benefit from the increased efficiency and simplicity of the combined network, which is expected to spur greater rail-to-rail competition and support customers in growing their rail volumes.
Following final regulatory approval, a single integrated rail system will connect premier ports on the U.S. Gulf, Atlantic and Pacific coasts with key overseas markets. The combination of CP and KCS networks will offer unprecedented reach via new single-line hauls across the combined company’s continent-wide network.
Importantly, no customer will experience a reduction in independent railroad choices as a result of the transaction. Additionally, with both companies’ focus on safety and track records of operational excellence, customers will benefit from a seamless integration of the two systems without service disruption.
CP and KCS interchange and operate an existing shared facility in Kansas City, Mo., which is the one point where they connect. This transaction will alleviate the need for a time consuming and expensive interchange, improving efficiency and reducing transit times and costs. The combination also will allow some traffic between KCS-served points and the Upper Midwest and Western Canada to bypass Chicago via the CP route through Iowa. This will improve service and has the potential to contribute to the reduction of rail traffic, fuel burn, and emissions in Chicago, an important hub city.
-via Press Release

Customers Invest $3.2B along Norfolk Southern’s Network in 2022

Norfolk Southern Corporation partnered with 120 companies to facilitate 159 industrial development projects in 2022. The projects expanded operations or created new facilities along the company’s rail network. Collectively, they represent $3.2 billion in investment and the creation of more than 3,940 new jobs.

The Metropolitan Transportation Authority (MTA) unveiled a set of major station and accessibility improvements at Penn Station, part of its long-running effort to create a more accessible and comfortable station experience for the hundreds of thousands of daily Penn Station customers. The project’s new, fully accessible street entrance and fare control area at 7 Av and 33 St increases accessibility and reliability for all subway customers.