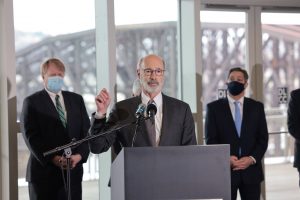 Due to the BIL’s passenger-rail investments, PennDOT and NS will now collaborate on the operating agreement and finalize the improvements required to increase passenger-rail service on the NS-owned corridor west of Harrisburg. The engineering and construction will stem from a NS operational feasibility study identifying improvements required to eliminate eight chokepoints and to allow freight and passenger trains to operate without conflicting with each other.

The improvements can begin when PennDOT and NS finalize an operating agreement including the project scope, how freight and passenger operations will both safely use the corridor, compensation for the use of NS’s assets, and adequate liability protection. PennDOT will fund the agreement by redirecting state Multimodal Transportation Fund dollars because part of the BIL’s funding is intended to replace train sets on the Amtrak passenger-rail network. PennDOT had been setting aside funding to meet requirements from a 2008 federal law which would have required approximately $350 million from Pennsylvania toward train set costs.

After an agreement is finalized, work could begin on several improvements anticipated to be completed over an estimated five years of construction. The additional service will begin after these improvements are made.

The Harrisburg, Lewistown, Huntingdon, Tyrone, Altoona, Johnstown, Latrobe, Greensburg, and Pittsburgh train stops are on NS’s Pittsburgh Line, which is part of the Premier Corridor, a main artery for double-stack intermodal traffic moving between Chicago and metropolitan New York. It is one of the busiest and fastest links on the railroad’s network, with major terminals in Toledo, Cleveland, Pittsburgh, Harrisburg and the Lehigh Valley. In a typical year, more than half of NS’ time-sensitive parcel and less-than-truckload shipments use the route at some point. NS trains deliver or pick up freight at 140-plus stations along the corridor, serving more than 800 customers.

“Our railways are vitally important to Southwestern Pennsylvania’s economy—transporting goods to the rest of the Nation and connecting people to the Commonwealth,” said U.S. Senator Bob Casey. “Thanks to the infrastructure law, we’re going to be able to make critical improvements to both freight and passenger rail. This news is a win for travelers and businesses who rely on our railways.”

“I strongly supported the Bipartisan Infrastructure Law in Congress because I knew the investments in infrastructure it would make would greatly benefit Pennsylvania,” Congressman Michael Doyle said. “Our economy depends on rail to move thousands of passengers and millions of tons of cargo a year, and the investments announced today will improve Pennsylvania’s railroad capacity significantly in the coming years. I’m also pleased that the new infrastructure law will result in more round-trip rail service between Pittsburgh and Harrisburg.

More information on PennDOT’s efforts to improve intercity passenger rail in Pennsylvania is available on the Plan the Keystone website.

As part of the MBTA’s Capital Programs, the Capital Transformation team will hold a virtual pre-construction public meeting on Thursday, October 13, at 6 PM to discuss work to be completed at Codman Yard. The Codman Yard Expansion and Improvements project includes replacing existing tracks and adding six new storage tracks within the existing yard to hold 36 additional Red Line vehicles, increasing yard capacity by over 50%.

Norfolk Southern Corporation has created a combined Transportation and Network Operations organization led by Paul B. Duncan. Duncan has been promoted to Senior Vice President Transportation and Network Operations and will lead the team responsible for designing network operations, executing network plans, and coordinating the movement of trains across the company’s rail network.