Another 50 locomotives – made in the U.S. and cleaner, faster, and more fuel efficient than predecessors – have been ordered by Amtrak from Siemens Mobility, which worked with Amtrak to design this locomotive series for another major investment in our long distance services, the backbone of our National Network.

The new locomotives are designated as ALC-42 for “Amtrak Long-distance Charger, 4,200-horsepower.” They will primarily replace Amtrak P40 and P42 diesel-electric locomotives, which have a lower top speed and began service under different emissions standards 30 years ago. 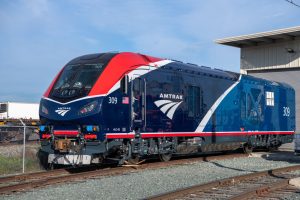 Amtrak is paying a total of up to $2 billion for the new locomotives and supplemental multiyear maintenance support in our National Network, including about $850 million in funding set aside when the initial order was announced in 2018.

The first of the ALC-42’s entered service in February on our famous Empire Builder trains and are next to be deployed on our well-known City of New Orleans trains between their namesake city and Chicago. Starting with the tenth unit (delivered in April), the locomotives will carry the seventh standard paint scheme in the 50-year history of Amtrak.

Kansas City Southern (KCS), Canadian Pacific, Monterrey Metropolitan Rotary Club (Rotary) and NASCO announced the launch of the Save the Monarch Butterfly 60,000 Tree Challenge North American Boxcar Tour to raise $100,000 USD. The funds raised will be used to plant 60,000 oyamel trees at El Rosario Monarch Butterfly Sanctuary in Michoacán, Mexico to help reestablish the monarch population. This past week, the Monarch Mariposa Boxcar rolled out of the GATX shop in Hearne, Texas.