Amtrak, in conjunction with VIA Rail Canada (VIA Rail), NYSDOT and other federal agencies, today announced the resumption of service to Toronto via the Maple Leaf train on Monday, June 27 with tickets now available via Amtrak.com, the Amtrak app, Amtrak ticket desks and kiosks, and through 1-800-USA-RAIL. Travelers departing from Canada can also book their tickets at ViaRail.ca, and through 1-888-VIA-RAIL. The first northbound Maple Leaf train will depart NYP at 7:16 a.m. on Monday, June 27th and arrive in Toronto at 7:43 p.m. for the first time since 2020. The first southbound Maple Leaf train since 2020 will depart Canada’s Toronto Union Station (TWO) at 8:20 a.m. on Tuesday, June 28th and arrive at Moynihan Train Hall at New York Penn Station (NYP) at 9:55 p.m.

Toronto travelers and visitors can expect the same amenities onboard on the Maple Leaf as they do on all other Amtrak trains including, free Wi-Fi, Business Class seats, the freedom to use phones and electronic devices at all times (no “airplane mode”), the ability to travel with small pets, a café car, large spacious seats with ample leg room, and no middle seat.

In addition to the standard entry documentation requirements, the Canadian and United States Governments have several additional requirements customers must follow for entry into Canada and the United States as it relates to mask requirements. Amtrak is working to also restore its service to Montreal and Vancouver and will be announcing details at a later date. 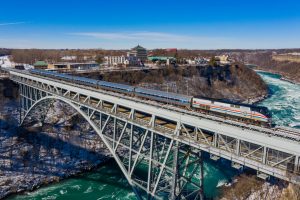