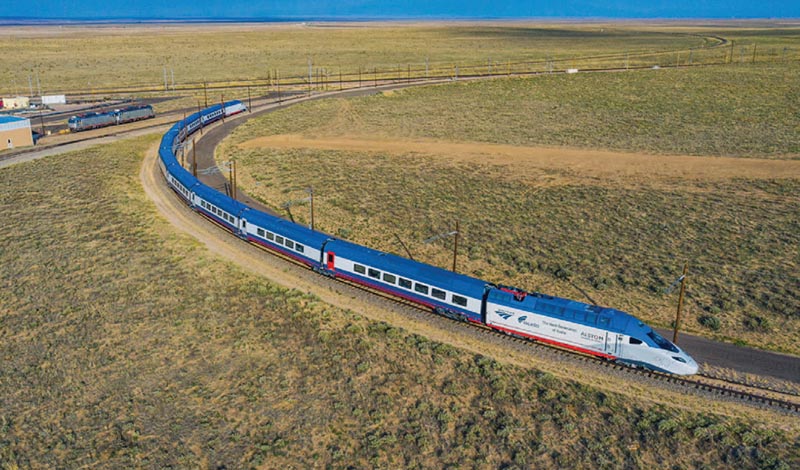 Trainset 1 is seen at the Transportation Technology Center (TTC) in Pueblo, Colorado in 2020 undergoing high-speed testing. The test center began life in 1971 as the U.S. Department of Transportation High Speed Ground Test Center to test several hovertrain concepts. When those pie-in-the-sky projects were abandoned in the 1970s, the site was transferred to the Federal Railroad Administration, and later, on January 1, 1998, it was Incorporated as a wholly-owned subsidiary of the Association of American Railroads. The center includes an electrified, 17-mile loop track capable of hosting 160-MPH operation. The Acela II continues to undergo dynamic testing with full instrumentation to conform its suitability for revenue passenger service planned for later this year. 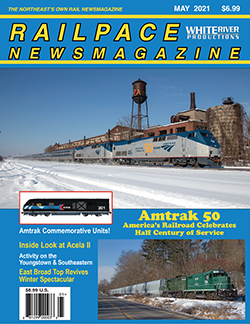 Amtrak celebrates a half century of service to America with the forthcoming introduction of its new Acela II trainsets. Twenty-eight new Acela II speedsters will replace twenty, 20-year old original Acelas, providing a boost in capacity in seating aboard each trainset and in the number of trainsets.

The original six-car Acelas offered 304 seats per trainset, for a fleet capacity of 6,080 passengers. The new nine-car Acela II trainsets will offer 386 seats each, for a fleet capacity of 10,808, a net gain of 4,728 seats.
Up to 17 of the 20 existing Acelas are deployed on the average weekday, and each trainset can cover up to 900 miles each day between Boston, New York, and Washington, D.C.

Rebuild or Buy New?
As the original Acelas near the end of their service life, the decision had to be made whether to rebuild them or buy new equipment. The matter was resolved in favor of new equipment, as the Acela was a product of late-1990s design, with its sophisticated electronics running on Windows 98 technology with serial ports required for diagnostics and adjustments. Another consideration is that a number of vendors of this 1990s technology no longer exist, and replacement parts are becoming harder to find. Simply put, off-the-shelf, state-of-the-art technology had to be acquired.

Fabrication of the cafe car shell is underway at Alstom in Hornell, N.Y.

Concept development for the new Acela began with working groups in 2012, and a request for proposal was issued in July 2014. A contract for Acela II, based on the French TGV tilt-train design, was issued to Alstom in August 2016. Alstom proceeded to outfit is U.S. shop – ironically located in the former Erie Railroad locomotive shop in Hornell, N.Y., and by 2019 the pieces of Acela II were beginning to come together. The first trainset appeared ready for testing. On March 17, 2020, Trainset 1 made its way west to the Transportation Technology Center in Pueblo, Colo., for a year’s worth of rigorous testing and evaluation on TTC’s 14-mile loop of high speed electrified track.

Acela II Design
Acela II is an articulated trainset wherein each passenger car shares a bogie (truck). This results in 28 axles per nine-car trainset (excluding the power cars), versus 36 axles on the original six-car Acela. The two power cars (locomotives) ride on standard B-B power trucks; none of the coach bogies are powered. This arrangement provides less rolling resistance and smoother ride quality. The new Acela is much lighter on its feet– as former Amtrak president David Gunn once quipped, the original Acela was a “high velocity bank vault.” Other railroaders refer to it as “The Tank.”

The Acela II has one current collector (pantograph) on each power car, and in regular operation only the rear pantograph is raised. This was determined to be best practice two-pantograph operation on the original Acela because too much wire bounce, resulting in excessive arcing from the rear pan.

Dynamic Testing
While dynamic testing is underway at the TTC in Pueblo, testing of Trainset 2 has been conducted on the Northeast Corridor and Amtrak’s Harrisburg Line. First came testing on straight track, and that meant the “Racetrack”, 17 miles of tangent between Midway (Monmouth Junction) and Milham (near Hamilton), N.J. Passing with flying colors, it was next to curving trackage near Torresdale, Pa., where there exist three reverse curves between Grundy And Holmes interlockings south of Bristol, Pa. Finally, there has been “Representative Segment Testing” which includes measuring dynamics over a variety of infrastructure between Ragan (Wilmington, Del.) and Perryville, Md., and on the north end of the NEC under constant-tension catenary between Cranston and Westerly, Rhode Island…Read the rest of this article in the May 2021 issue of Railpace Newsmagazine! Subscribe Today!